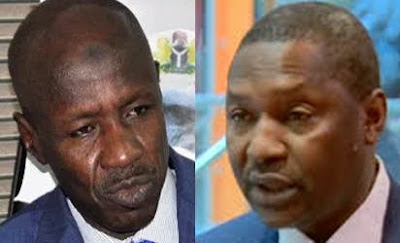 The names of the three nominees recommended the Minister of Justice and Attorney-General of the Federation, Mr. Abubakar Malami, to President Muhammadu Buhari to pick as a replacement for Ibrahim Magu have emerged.

Top on the list is a retired Deputy Inspector-General of Police, Mohammed Sani Usman, who is believed to have been vetted by President Muhammadu Buhari for the job.

Also recommended by Malami for the job, according to an online medium, is the current FCT Police Commissioner, Bala Ciroma, who had previously served as the EFCC Head of Operations, and a retired Assistant Inspector-General of Police, AIG, from Kebbi State.

Buhari is said to have also vetted retired DIG Usman and Ms. Diseye Nsirim-Poweigba, a retired police commissioner in Niger State, as replacement for Magu, who has been on the post in acting capacity since November 9, 2015, following the 8th Senate’s rejection of his nomination twice.

But the AGF has kept mute on the development, as he neither denies nor confirms sending the memo to Buhari.

The Acting Chairman of the EFCC, Ibrahim Magu, appears unperturbed over the move to oust him. carrying on with his job without any qualms.

But one way or the other, Buhari will either retain or remove Magu.