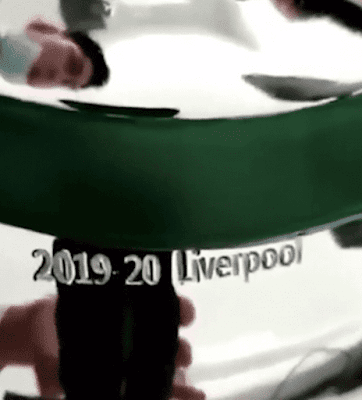 Liverpool have had one hand on the Premier League trophy all season – but now it appears they literally have their name on it.

The Reds sit 25 points clear of their nearest rivals in their quest for a first league triumph in 30 years.

Now they need a maximum of two wins from their final nine games to finally be crowned champions.

But it appears chiefs have jumped the gun and had the trophy already engraved after a video was leaked on social media.


Of course, the video could be a hoax and the “Premier League trophy” could be a replica. However, if it is, in fact, a fake, it’s a very convincing one.

The trophy even comes complete with intricate lions on either handle, red ribbons, and even past Premier League winners.

Despite the effort, Liverpool’s name does appear to be somewhat crooked when engraved on the trophy. It is very unlikely the Reds have had their name etched onto the gong.

After all, quite often TV cameras will pan to a skilled artist frantically, but precisely, engraving the champions’ name on the trophy with just minutes to go until its presentation.

Last season, Manchester City beat Brighton to just about hold off Liverpool and be crowned champions, leaving the engraver to leave his work as late as possible.

The 2019-20 season is set to restart on June 17, with Liverpool’s first game the Merseyside derby against Everton.