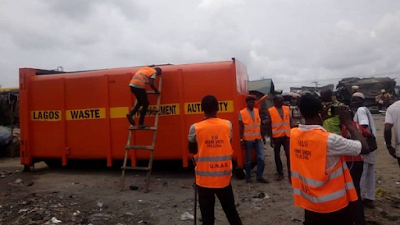 Some street sweepers and supervisors took to the social media at the weekend to protest the non-payment of their salaries.

“We have been working for three consecutive months without receiving salaries. We are hungry and also have families to cater for.


We are working without getting paid.

We ensure Lagos roads are always neat, but we are not appreciated,” one of the supervisors said in a video on the social media.

He said the sweepers and supervisors worked from morning till 4pm daily.

The supervisor, who said, he is asthmatic, pleaded that he does not have money to buy drugs.

Another protester said that the sweepers have not been paid in the last three months.

The woman said despite her grey hair, LAWMA is stopping them from reaping the fruit of their labour.

Some group of LAWMA supervisors, however, differed with the protesters over who owed them.

They said: “It is the contractors that are supposed to pay us, not LAWMA.”

The Acting Managing Director said the agency has begun an audit process to sanitize the system.

He said that the sweepers were directly engaged by the contractors of the agency, who were responsible for their monthly payments and upkeep.

Odumboni said that LAWMA had made April payments to the contractors for disbursement to their workers, adding that efforts are ongoing to ensure the prompt release of subsequent payments.

According to him, his salary was being paid by an agency headed by a woman called ‘Iron Lady’.

We were just being informed that the April salary has been paid. We went to ‘Iron Lady’ to collect ours, but she declined to pay us. LAWMA should help us order her to pay us,” he said.

“We have issues with the former LAWMA managing director. Since he was sacked, the salaries were delayed before the appointment of the new MD.

We find it difficult to supervise those working with us because of the non-payment of their salaries.  The meagre salary is what we live on.

Our families are not enjoying us. We use the salaries to pay debts at the end of the month,” he said.

Another supervisor, Ganiyu Lasisi, said that the former LAWMA boss owed them.

Olasunkanmi Olanrewaju, who supervises sweepers at Mile 2, said he learnt that the new LAWMA chief is conducting auditing, hence the delay in payment of their salaries.

Nojimu Agbaje, who monitors Osborne to Falomo in Ikoyi, said: “After regular payment of two months, the former management of LAWMA started delaying the salaries.”