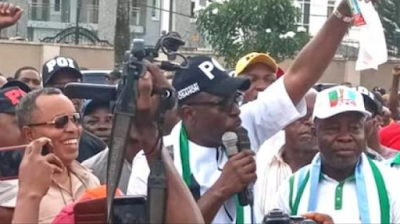 Osagie Ize-Iyamu, governorship candidate of the All Progressives Congress (APC) in Edo, has asked Godwin Obaseki, governor of the state, to return to the APC.

Obaseki had defected to the Peoples Democratic Party (PDP) after he was disqualified from seeking the APC ticket for the September election.

Ize-Iyamu, who was candidate of the PDP in the 2016 governorship election, crossed over to the APC in the heat of the misunderstanding between Obaseki and Adams Oshiomhole, suspended national chairman of the APC.

Oshiomhole is believed to be backing Ize-Iyamu.

After being declared winner of the APC governorship primary on Monday, Ize-Iyamu said he is willing to work with Obaseki if he would return to the party he “originally belong” to.

“By this process we just competed, the party is now on its step to full recovery. I also salute Governor Obaseki, and I will appeal to him to return to the party,” he said.

“In every party we have disagreement but I don’t want it that it is this disagreement that would push him out. I once made that mistake. It might be nice for him to come back, and certainly I’m going to work with with him.

“We’ve shown the example today in APC as we are determined to be law abiding. The few months we have for campaign, let’s do it in a law abiding manner. I’m pledgeing on behalf of my party that we will be peacul and respectful.

“I’m naturally happy and humbled by the overwhelming support from the 18 local government areas. I’m so related that there was no incident of violence as this has been my prayer point. The election went on with strict adherence to the state’s government COVID-19 regulations.”

Ize-Iyamu said if he wins the September governorship election, he will be working with everyone to move the state forward.

He also thanked President Muhammadu Buhari, Oshiomhole and the security agencies for their support in the primary election.