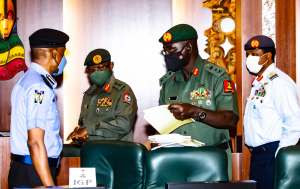 President Muhammadu Buhari on Thursday told heads of security agencies including the service chiefs that he will no longer tolerate the worsening security situation in the country.

President Buhari at the meeting with the security heads told them that their best was not good enough and charged them to redouble efforts to ensure that all the security challenges in the country were tackled headlong.

“He is extremely unhappy about what is happening and he feels that even though the security agencies are doing their best, their best is not good enough for him and he wants an immediate reversal of the current trend.


“An immediate reversal of our misfortunes in all their dimensions. Mr President also told us clearly that he and indeed the administration came to power on the platform of three issues, fighting insecurity, overcoming our economic difficulties and dealing with the scourge of corruption.”

The President also told the heads of security agencies to justify their continuous stay in office as he expressed anger at their less than satisfactory performance so far and that he will no longer accept further escalation in insecurity in the country, which has led to protests, especially in the northwest.

The NSA said the President told the security chiefs that they were not imposed on him, and that it was therefore up to them to prove themselves.

Monguno said the president was also unhappy at the continuous lack of synergy among the various security agencies and wanted the situation resolved.