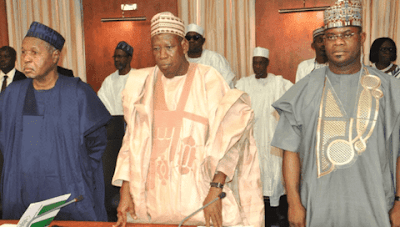 As insecurity continues to rise in the Northern part of the country, the 19 state governors of the region on Monday met with heads of security agencies in the office of the National Security Adviser, NSA, Major General Babagana Monguno (retired) in Abuja.

Governor Bello Muhammad Matawalle of Zamfara State disclosed this after meeting behind closed doors with the Chief of Staff to the President, Professor Ibrahim Gambari at the Presidential Villa, Abuja.

Recall that Zamfara State has become one of the epicentres of banditry activities in the country.

Briefing State House correspondents after meeting with Prof. Gambari, the Zamfara State Governor said that the state has adopted stick and approach in dealing with insecurity in the state, adding that the repentant bandits that have embraced peace have been reintegrated, while those that have shunned dialogue are facing the full wrath of the law.


Asked on the agenda of the meeting, he said,  “I am here to see the Chief of Staff because of the issue of security that is bedevilling Zamfara State. We have discussed extensively the issue of insecurity in Northern Nigeria not just Zamfara State.

“Today (Monday), we met in the National Security Adviser’s office with Northern Governors and the Inspector General of Police and other security agencies.

“We discussed seriously on the issue of insecurity and the Chief of Staff invited me today to come and brief him about insecurity in my state which I did. We have discussed about it and understand where we are going. Zamfara State government and the security are doing their best to ensure we contain insecurity.”

Fielding question on the success of security operations against the bandits in the state, he said that the security agencies were doing everything possible to bring normalcy to the place.

He said, “It is very successful. Security agencies are doing very well and they have been working for about one month and we have seen the results, they have recorded a lot of successes in their operations.

“You know these operations are ongoing and they have the support of everything they need from the state and we assure Nigerians that within some few days they will make tremendous achievements.”

Commenting on the homegrown solutions his administration adopted in ensuring that the rise in insecurity was stopped, he said that the government adopted the stick and carrot approach.

He said,” We have to adapt so many ways to tackle the insecurity. We use stick and carrot and it is going concurrently. There are some repentant bandits that have already subscribed to the peace initiative, we are using them and some that have refused to dialogue, we are fighting them, so we are using both.”