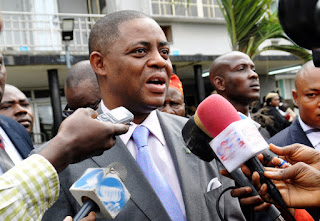 Former Aviation Minister, Femi Fani-Kayode has hinted that the embattled governor of Edo State, Godwin Obaseki, may have decamped.

Fani-Kayode took to his Twitter page to reveal that he was “glad to hear that Obaseki has joined PDP.”

Obaseki was declared ineligible on Friday by the screening committee inaugurated by Adams Oshiomhole, National Chairman of APC and former godfather of the embattled governor.

The screening committee said Obaseki was disqualified on the basis of his Higher School Certificate.

According to the committee, Obaseki could not produce his Higher School Certificate.

Prof. Ayuba, Chairman of the committee, said the document he produced only attested to his attendance.

He also said the committee could not verify the governor’s National Youth Service Corps (NYSC) certificate.

Obaseki, however, noted that he will not appeal the party’s “unjust” judgment – which makes his move to another party imminent.

Reacting to his disqualification, Fani-Kayode had earlier stated that Obaseki bit the hand that fed him.

He said Obaseki learned his lesson the hard way.

But on Saturday, Fani-Kayode wished him luck on his journey to the Peoples Democratic Party.

Glad to hear that Obaseki has joined @OfficialPDPNig with (assuming it is true) all the LGA Chairmen & House of Assembly members in Edo state. He lost round 1 to Oshiomole and I hope that he has better luck in round 2. This is especially so now that we are on the same side!

However, Obaseki is yet to confirm or deny the statement made by Fani-Kayode.