If we continue borrowing, Nigeria will stop breathing—Secondus laments 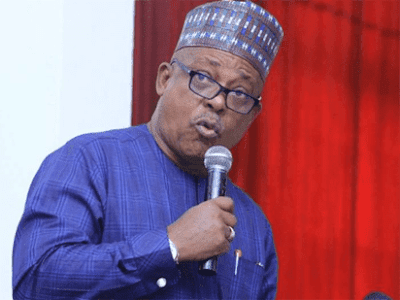 The national leadership of the Peoples Democratic Party, PDP, yesterday, lampooned the Federal Government over continued external borrowings, just as it warned that if the borrowings continued, it would get to a position where Nigeria would stop breathing, both politically and economically.

Speaking with journalists in Abuja after a three hours reconciliatory meeting with PDP Senate Caucus, National Chairman of PDP, Prince Uche Secondus, urged Senators on the platform of the party, to henceforth, protest such a move by the Federal Government to embark on additional borrowing.

Recall that the Senate had so far this year, approved $22.7 billion, $5.53 billion and N850 billion on different occasions for the Buhari regime to fund the 2020 budget.


Secondus said, “We are also worried about the continuous borrowing by the executive arm of Government if it continues like this, Nigerians would be feeling the pains on their neck and It will get to a point if we continue to borrow the way the executive arm is carrying on, it will be difficult to breath both politically and economically. So, this must come to an end, there must be an end to borrowing. Those are the issues we have asked our senators to raise in the Senate.”

When asked whether the Senators should stage a walk out in case of any move to borrow more money, the PDP National Chairman said, “they know what to do.”

Speaking on the meeting, Secondus said, “I think that for today’s (yesterday’s) meeting at the Senate in the National Assembly, we came to interact with our senators, the PDP caucus. We held a very useful discussion on behalf of the leadership of the party. We tabled before the Senate caucus of PDP the issue of electoral reforms which is also on our minds and on the minds of Nigerians.”

On the forthcoming Edo elections, Secondus said, “Edo election is ongoing, the processes have started yesterday was the three man’s delegate election. On the 19th is the congress proper.”

Also speaking on the meeting, Senator Abaribe, noted that the meeting was very productive as issues that will lead to the growth and development of the party were raised and discussed, adding that the Senators were happy with the National leadership of the party and they are on the same page.

Abaribe said, “The chairman Uche Secondus has come to meet with the PDP caucus in the senate and we have had a very useful discussion about the happenings in the National Assembly and our role in the Senate and in the national Assembly and I can say that it was a very productive meeting.”

Meanwhile, at the meeting, the PDP National Chairman and other members of the NWC took time to plead with the Senators and pacify them not to be angry with the party, just as there were promises that henceforth, they would be carried along in all its ramifications.

It was gathered that the misunderstanding was not intentional and also not to ridicule the Senators who are very strong and major stakeholders the party must work with.