I see Ajimobi on danger list, pray for him – Primate Ayodele 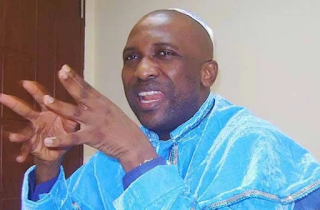 The leader of INRI Evangelical Spiritual Church, Primate Ayodele, has revealed what he described as God’s revelation to him concerning the former Governor of Oyo State, Abiola Ajimobi.

Reacting to the death rumours surrounding Ajimobi, Primate Ayodele said he still sees the former Governor “on danger list and he needs serious prayers to come back alive from what has befallen him.”

“I see Ajimobi on danger list, he needs intense prayers to return alive,” he said.

He also maintained his earlier stand that the vaccine for Coronavirus will be found be in July and will be produced by China.


“Some countries claim to have found COVID-19 vaccine, the real vaccine will be out in July which will be produced by China,” Ayodele said in a series of prophecies.

“Celebrities are not left out in COVID-19 death,’’ he warned.

The rumour of the former Governor’s death intensified a few days ago but Fatima Ganduje, one of the daughters, among other close associates, debunked the claims.

Ajimobi was appointed the Acting National Chairman of the All Progressives Congress (APC) following the suspension of Adams Oshiomhole by an Appeal Court in Abuja .