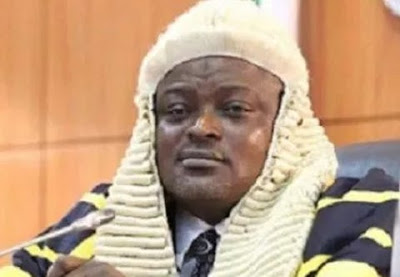 The Speaker of the Lagos State House of Assembly, Mr Mudashiru Obasa, on Saturday appeared before the House panel of enquiry on the corruption allegations levelled against him by an online medium.

Obasa told the panel that the allegations were untrue and that they were the handiwork of his enemies.

The Speaker appeared before the nine-man fact-finding panel of the House headed by Mr Victor Akande (Ojo Constituency I) at the House chamber.

The News Agency of Nigeria reports that an online medium had reported on May 23 that at least 64 bank accounts had been discovered and linked to the Bank Verification Number of the Speaker.


The online medium said that it discovered that the accounts registered with various names were being used to siphon public funds and many other allegations against the Speaker.

Responding to questions from members of the committee, Obasa said all the allegations made by the online medium in the reports were unfounded.

“We bought (Toyota) Land Cruisers for principal officers of the House. The cars we bought for them were more expensive than those of other members and we followed due process in the purchase.

“Also, it is not true that my wife collects N10m monthly from the House. Anyone who says she does should come with proof and evidence.

“My approval limit as the Speaker is N100m and anything above that would have to be approved by the Fund Management Committee,” he said.

Obasa, while explaining the expenditure of N80m as estacode for the training of women in Dubai, said that wives of the 20 lawmakers attended the event and that he was there to declare the event open.

“We gave N4m to each of the participants for air ticket, hotels, feedings and local travel.

“Air ticket to Dubai alone cost about N2m. Some of these allegations were raised for a crusade to get the Speaker out of office.

“The House of Assembly is above common standard of excellence and we have to train people, and this comes at a cost. Learning is not cheap and I have never collected N80m for estacode at a go before,” he said.

Obasa also denied the allegation that he spent N53m on a trip to the United States of America with his mistress.

“We were invited by the Consular General for a programme in the United States. Later, the programme was postponed, but I had gone ahead.

“I had to return home and I told others not to bother to come until the new dates,” the Speaker said.

“On the issue of awarding contracts to companies belonging to me, they should come and show evidence of where I awarded contracts to myself,” he told the panel.

On the report that he tricked ex-governor Akinwunmi Ambode to spend N350m on hosting a meeting of Conference of Speakers, Obasa told the committee that this was not possible. He said such a situation was not possible since Ambode was an accountant, who rose to be the chief accountant of the state.

“All these allegations are deliberate actions of my enemies to achieve their aims that they could not achieve in the House to remove me as the Speaker, which was why they came up with such reports,” he said.

The Deputy Speaker of the House, Mr Wasiu Eshinlokun-Sanni, who also appeared before the panel, denied attending a meeting in Dubai as against the report of an online medium.

The Clerk of the House, Mr. Azeez Sanni, also defended the estacode for the trip to the United States, saying that it followed the standard procedure.