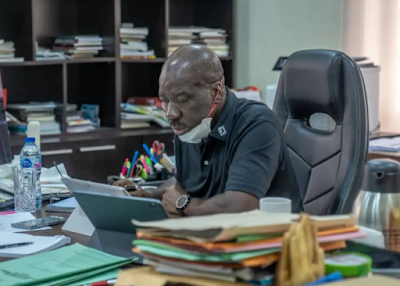 On Tuesday, confusion ensued over two rulings of the federal high court, Port Harcourt, on the participation of Godwin Obaseki, governor of Edo state, in the governorship primary election of the Peoples Democratic Party (PDP).

After he defected from the All Progressives Congress (APC), the PDP granted a waiver to Obaseki to contest in its primary election.

The governor defected to the PDP after the APC disqualified him from contesting in the primary election that has eventually produced Osagie Ize-Iyamu as the party’s flagbearer.

Dissatisfied with the waiver, Omoregie Ogbeide-Ihama, a PDP aspirant, filed a suit and sought a relief to disqualify Obaseki from participating in the party’s primary election fixed for Thursday.

Through Donald Denwinge, a senior advocate of Nigeria (SAN), and Ferdinard Orbih, also a SAN, Ogbeide-Ihama prayed the court to restrain PDP from allowing Obaseki contest in the primary election on the ground that he did not purchase the form within the period stated in the party’s time-table.

He also asked the court to restrain INEC from accepting Obaseki as an aspirant of the PDP.

Ogbeide-Ihama said only aspirants who purchased the party’s nomination form and were screened within the stipulated time should be allowed to contest in the primary.

Emmanuel Obile, the presiding judge, granted the restraining order pending the hearing and determination of the main suit.

In a different application, Ogbeide-Ihama also asked the court for an order permitting him to serve the originating summons and other court processes on all the defendants by substituted means.

He further prayed the court to “abridge the time within which the defendants may enter appearance and file their respective counter affidavits or other processes in reaction to the plaintiff’s claim”.

THE JUDGE GRANTED PRAYERS OF THE APPLICANT

The judge granted leave to the applicant for substituted means of service on the defendants either by leaving the processes at the various addresses of the defendants or by publication in two national dailies and that it would be deemed as “proper and valid service”.

The judge ordered that processes be served on Secondus, Ogidi and Chinda by substituted means at their residences in Port Harcourt.

The order and other processes are also to be served on the PDP at its national headquarters in Abuja and Obaseki at the government house in Benin.

The judge also ordered accelerated hearing of the suit and made an order abridging time and adjourned till Wednesday.

Commenting on the two separate rulings, Tayo Adeniyi, a lawyer, told TheCable that both applications are interlocutory and were filed in the substantive suit.

The report on the court restraining Obaseki from the PDP primary generated different reactions when a report emerged that no court granted such order.

But documents seen showed that the reliefs Ogbeide-Ihama sought in the two applications were granted by the judge.

He had asked the court to restrain Obaseki from the primary and that the defendants should be served through substituted means.

Apparently, the incomplete document was merged with parts of a different application and a wrong interpretation was given.

OBASEKI: THE RULING AGAINST ME WILL NOT STAND

Hours after the ruling of the court, Obaseki had expressed confidence that he would participate in the primary.

Speaking through Crusoe Osagie, his media aide, the governor said that he did not violate any aspect of the PDP constitution.

“We know that the ruling will not stand. The governor has not violated any rule in the PDP constitution. We are hopeful that he will participate [in the primary poll] and the ruling will be set aside,” he had said.

On Tuesday evening, a high court in Ekpoma, Edo, restrained the PDP from excluding Obaseki from the primary. 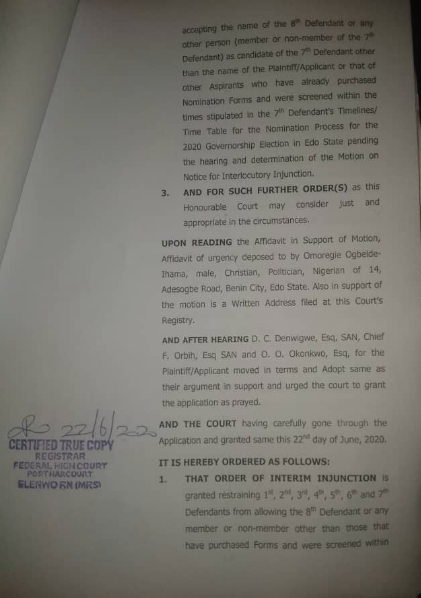 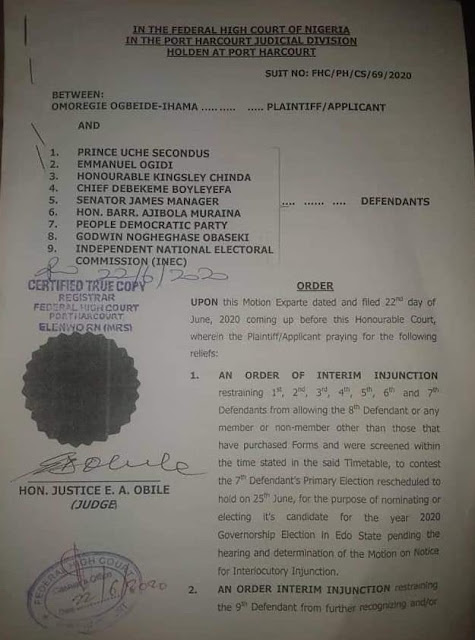 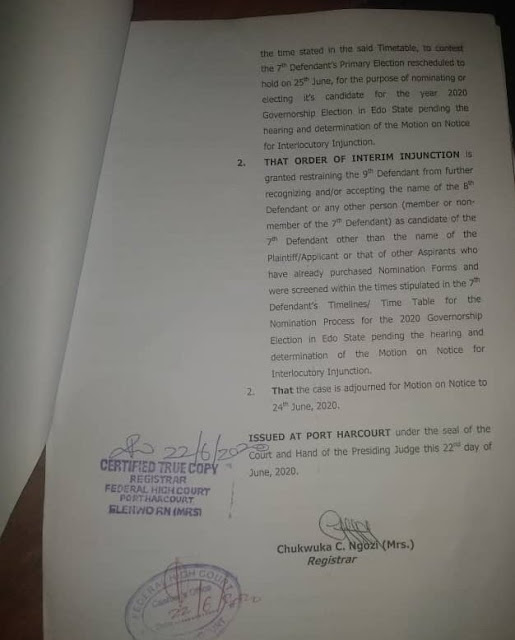 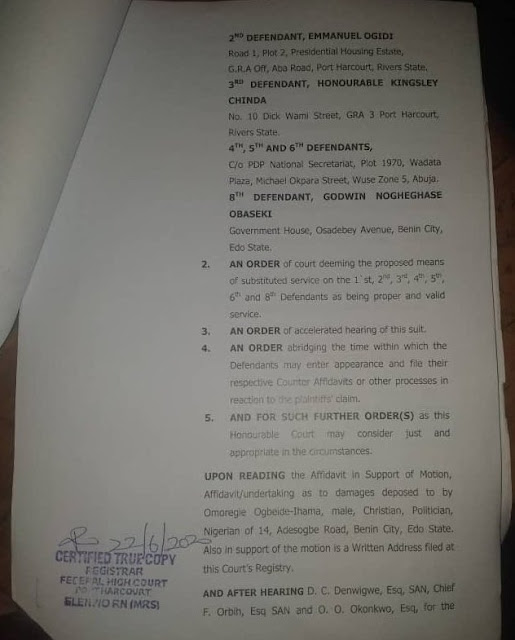 The ruling that barred Obaseki from the primary 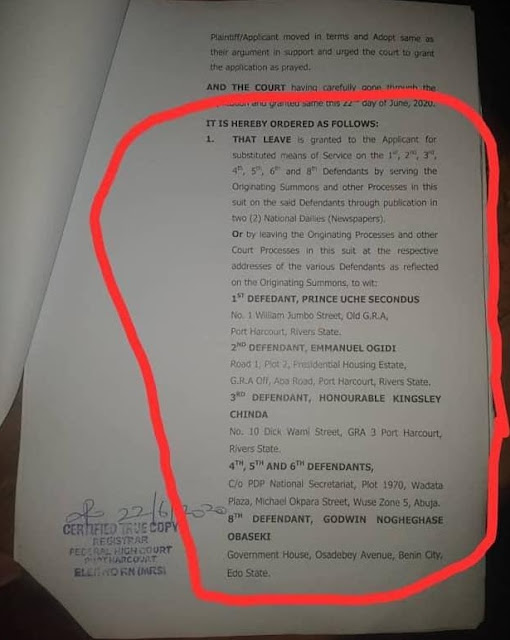 The ruling that granted the aggrieved PDP aspirant permission to serve the court processes on all the defendants by substituted means.