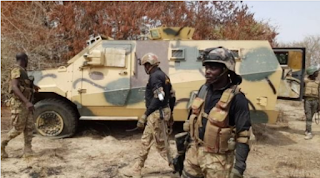 The Defence Headquarters (DHQ) says troops of the newly-launched Operation Accord have killed no fewer than 70 armed bandits and cattle rustlers.

This operation took place – with the help of civilians – on Friday in Kashia Forest in Kaduna State.

The feat was achieved by ground and air offensive, Coordinator, Defence Media Operations, Maj.-Gen. John Enenche, said in a statement on Saturday.

It involved troops of Operation Thunder Strike, under Operation Accord, 312 Artillery Regiment and local vigilantes.

Enenche noted that following credible information on the bandits’ movements within the areas, troops pursued them through Gidan Maikeri village in Chikun Local Government Area into the forest.

“Their location was identified and consequently engaged by Nigerian Air Force helicopter gunships. After the air interdiction, 70 bandits were confirmed killed by human intelligence while others escaped with injuries,” he said.

The spokesmen said exploitation operation is still being carried out by the troops in the forest.

Enenche appealed to people in the areas to report those with sudden and suspicious injuries to the security forces.

Items such as recharge cards, cigarettes, soft drinks and groceries were recovered.

The Military High Command congratulated Operation Thunder Strike, Operation Yaki and Air Component of Operation Accord for their dexterity.

The DHQ further vowed to sustain the onslaught against outlaws.