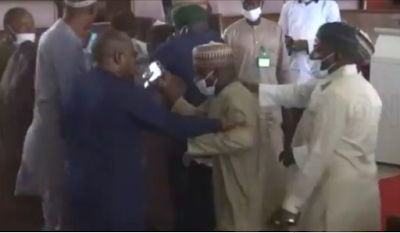 Some lawmakers at the Kaduna state house of assembly were involved in a fight over the impeachment of Mukhtar Hazo, former deputy speaker.

Hazo was impeached by 24 members of the assembly at Thursday’s plenary session.

While the reason for his impeachment remains unclear, there are reports that it was over “inability to discharge his duties”.

After the impeachment process, members of the assembly elected Isaac Auta, lawmaker representing Kauru constituency, as the new deputy speaker.

Following the swearing-in of the new deputy speaker, Liman Dahiru, lawmaker representing Makera constituency, made attempt to seize the maze.

But the sergeants-at-arm blocked him and other members of the house who resisted the attempt engaged in a scuffle with supporters of the impeached deputy speaker.

The plenary ended in a rowdy session as some members were dragged out of the chamber.

Tthere are allegations that Hazo was plotting, alongside some other members, to remove Yusuf Zailani, the speaker.

He was also accused of committing other infractions against the rule of the assembly.

Hazo occupied the number two position at the assembly for only four months.

He was elected alongside Zailani following the resignation of some principal officers in February.

A planned impeachment was said to have forced the officers to resign at the time.