George Floyd: US embassy in Nigeria warns citizens against visiting its office 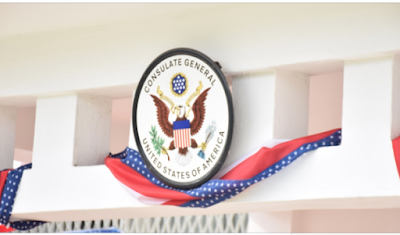 The United States Embassy in Nigeria has warned its citizens against visiting its consulate office at Walter Carrington Crescent in Victoria Island, Lagos, over a planned protest against the killing of George Floyd.

Floyd, an African-American man, was killed on Monday by a Minneapolis police officer. Video clips of the incident on the internet showed where a white police officer was kneeling on his neck for nearly 10 minutes.

The incident sparked off protests, some of which led to looting and vandalism of shops, across the US. As a result of this, the US government imposed a curfew on over 25 states in the country.

The US authorities also announced investigations into the death of the deceased and that four police officers involved in the incident have been sacked.

Some Nigerians, on Tuesday, protested against the murder of Floyd at the US embassy in Abuja, calling for an end to racial discrimination and injustice.

In an alert published on its website, the US embassy advised its citizens to be aware of their surroundings and avoid areas surrounding the US consulate office building.

“The U.S. Consulate General in Lagos has received reports that demonstrators plan to gather in front of the Consulate on Wednesday, June 03, 2020 to protest current events in the United States,” the alert read.

“Even demonstrations intended to be peaceful can turn confrontational and possibly escalate into violence.

“Be aware of your surroundings. Monitor local media for updates. Carry proper identification, including a U.S. passport with a current Nigerian visa. Review your personal security plans. Wear a mask when in public spaces to protect yourself and others from the spread of the COVID-19 virus.”