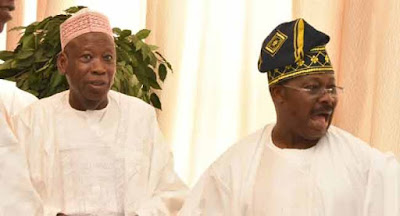 Governor Abdullahi Ganduje of Kano State has described the death of the former governor of Oyo State, Sen. Abiola Ajimobi, as shocking and devastating.

Ajimobi reportedly died on Thursday evening in a private medical facility in Lagos after a brief sickness.

The condolence is contained in a statement signed by the Chief Press Secretary to the governor, Malam Abba Anwar, on Friday in Kano.

“His death came calling when we needed him the most. He was undoubtedly a detribalised leader and a pillar of national development.

“This death would continue knocking hard on us for a very long time,’’ he said.

He prayed for Almighty Allah’s blessing and forgiveness to the reposed soul of the late Ajimobi.

Ganduje also commiserated with Ajimobi family, urging them to strive hard and follow his footsteps of unrelenting commitment to nation-building and patriotic leadership.

“It is on this note that I, on behalf of my family, government and the good people of Kano State, send our condolences to the family of our late respected and in-law, the government and people of Oyo State, over this unbearable demise of the former governor,’’ Ganduje said.

He then prayed for Almighty Allah to forgive all his shortcomings and reward his good deeds.