From resignation to suspension: How the APC drama played out in 24 hours 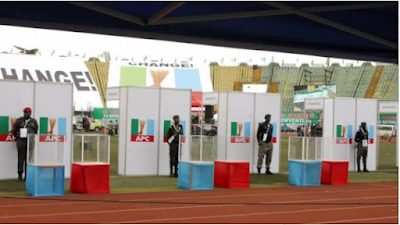 While many had predicted that the forthcoming governorship primary election of the All Progressives Congress (APC) in Edo state would come with some form of drama, the controversies of the last 24 hours have been shocking to some.

Adams Oshiomhole, national chairman of the APC, and Godwin Obaseki, governor of Edo, had been at loggerheads over the second term bid of the only APC governor in the south-east. Oshiomhole had thrown his weight behind Osagie Ize-Iyamu, who had contested against Obaseki in the 2016 election under the Peoples Democratic Party (PDP).

Obaseki, who was disqualified from the June 22 primary, had told his supporters that he would make his next line of action known after meeting with President Muhammadu Buhari. But it was Ibrahim Gambari, the president’s chief of staff, that he met before announcing his resignation from the APC. It is unclear why Obaseki did not meet Buhari as Rotimi Akeredolu, his Ondo counterpart, met with the president on the day Obaseki visited Aso Rock.

Following his exit from the ruling party, Philip Shaibu, Obaseki’s deputy, took a similar step but in a more dramatic manner. He pulled down the flag of the APC from his office amid cheers from his supporters.

Here is a 24-hour timeline of controversial events that unfolded in the APC in the past 24 hours:

Obaseki withdraws: The Edo governor resigned his membership of the ruling party without stating his next destination.

Oshiomhole’s suspension: A three-man panel of the court of appeal sitting in Abuja, on Tuesday, affirmed the suspension of Oshiomhole as APC national chairman, while also dismissing his appeal for lacking in merit.


Ajimobi takes over: Lanre Issa-Onilu, APC national publicity secretary, announced shortly afterwards that Abiola Ajimobi, deputy national chairman, would serve as the acting national chairman. Although Ajimobi was not physically present to make any pronouncements, Bolaji Tunji, his media aide, quoted the ex-governor of Oyo as saying: “we should therefore let peace continue to reign until we call the NEC meeting and take a position on the way forward.”

Along comes Giadom: While there were still speculations on if that was all on the theatrics, Victor Giadom, deputy national secretary of the party, declared himself acting national chairman, and subsequently nullified Obaseki’s disqualification from the governorship primary election.

NWC unites for Ajimobi: The national working committee (NWC) of the party had met and a majority voted against Giadom. They also reversed the order nullifying Obaseki’s disqualification. Hilliard Eta, APC vice-chairman, south-south, who said Giadom had resigned his membership of the NWC, likened the latter’s action to staging a coup.

Eta takes over from “unavoidably absent” Ajimobi: While addressing journalists during which he announced the reversal of the order by Giadom, Eta said that he would act on Ajimobi’s behalf since the former governor of Oyo state was “unavoidably absent”. Hope Uzodinma, governor of Imo, has also been appointed chairman of the primary election committee.

And while the confusion lingered, Obaseki maintained that although he has resigned from the APC, he has not moved to another party, stating instead that his focus is “to control the spread the COVID-19 pandemic, which is ravaging our country and threatening our healthcare system.”