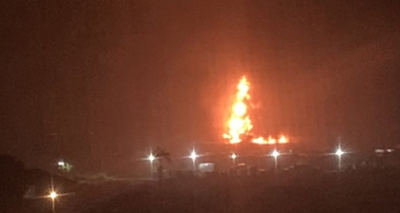 The Federal Road Safety Corps (FRSC) says a fresh explosion from the scene of Sunday morning inferno, involving four vehicles on the Lagos-Ibadan Expressway, has delayed the opening of out-bound Lagos lane for motorists.

Rescue operations that began in the early morning were still ongoing at the scene of the accident involving three tankers and a truck on Kara Bridge when another explosion occurred.

Ogungbemide, however, said that the situation had been brought under control, urging motorists to be patient and drive with care.


“There was this fresh explosion from gas tanker (one of the tankers involved in the accident). The cover of the tanker opened and another fire billow up, but it is under control. We had restricted movements to the inward Lagos route for in and out motorists,” Ogungbemide told NAN.

He said that fire services from Lagos and Ogun states “are on ground to bring normalcy back on the expressway’’.

Ogungbemide had earlier said the rescue operations recovered a body burnt beyond recognition from the inferno while two persons were injured. He said that two injured had been moved to Gbagada General Hospital.