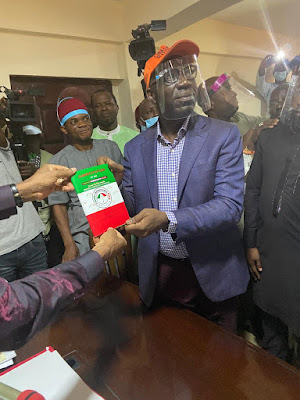 When Godwin Obaseki, governor of Edo state, announced his defection to the Peoples Democratic Party (PDP) on Friday, members o f the party hailed him, expressing confidence that “his good works will continue”.

On his part, the governor told those he met at the PDP secretariat in Benin, the state capital, that “the energy I see here is the kind of energy I require to take Edo to the next level.”

Obaseki and his new party are now focused on ending the 12-year dominance of the All Progressives Congress (APC) in Edo, making all south-south states to be under the control of PDP.

But six months ago, the PDP saw nothing good in Obaseki. While addressing a news conference in Benin on November 19, 2019, Dan Orbih, chairman of the PDP in the state, had said Obaseki failed to offer leadership to make the people enjoy the dividends of democracy.


He said the crisis rocking the APC had become a distraction for the governor, preventing him from offering meaningful governance.

Orbih had alleged that Obaseki had only brought agony and deprivation to the populace, denying them the benefits expected from democracy.

“It is obvious that the APC has nothing to offer to the people of Edo State. As at today, Edo State is the only state where only a few elected members of the state assembly are sitting. More so, the governor has not delivered on the 200,000 jobs he promised youths in Edo State,” he had said.

“Our roads are begging for attention. There is worsening insecurity, in spite of the huge amount of security vote he withdraws monthly. He should, henceforth, commence the support of security agencies in the state for efficiency and if he cannot, he should stop withdrawing or collecting security votes.”

“The APC promised better days for Edo State and more than 11 years after the people have nothing to show for the promise. Edo people should remain resolute and committed in effecting a change in government come 2020. The governor owes it a duty to account for every action of his in the state.”