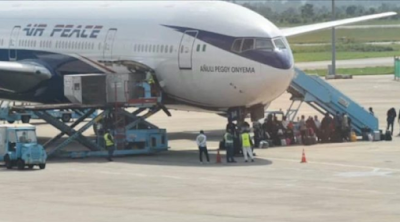 The federal government has asked Nigerians stranded in Turkey to pay $1,300 for one-way flight ticket.

In a statement on its website, the Nigerian embassy in Turkey said those returning home are expected to pay $1,300 for economy class while business class passengers will pay $1,800.

According to the statement, Air Peace has been contracted for the flight scheduled for July 5.

“Consequently, all prospective evacuees, duly registered with the Embassy, should purchase their own tickets through the account detail detached at the cost of $1,300.00USD for Economy class for adult/child fare and $1,800.00USD for Business Class Passengers,” the statement read.

It said that all prospective evacuees who have purchased tickets should forward them for confirmation, adding that flight seats will be done on a “first come, first served basis.”

The statement also said that only those who fully comply with federal government’s directive on COVID-19 would be allowed to board the flight.

“Any intending evacuees without the stipulated test result, or body temperature above 38 degrees centigrade, or any symptoms suggestive of COVID-19, will not be allowed to check in,” it added.

Reacting to the development, Bulama Bukarti, an analyst and human rights lawyer, described the federal government’s directive as “exploitative and inhuman.”

In a thread on his Twitter page, Bukarti wondered why the federal government could not contract Turkish Air to evacuate those stranded at a cheaper rate.

“The FG has scheduled the evacuation of Nigerian students stranded in Turkey, but they’re asked to pay quadruple the airfare. They’re required to pay $1300 for a one-way flight when return-ticket on Turkish Air is presently $620. But FG won’t allow Turkish Air to land,” he wrote.


The FG has scheduled the evacuation of Nigerian students stranded in Turkey, but they’re asked to pay quadruple the airfare.

“This is exploitative and inhuman. The students say they’re stranded as the FG itself admits. Why would they then be charged such an outrageous sum? Why would the FG insist on Air Peace when there’s a much cheaper option that’s safer and more efficient? This smells rat.

“Please join me to urge the FG to review this injustice. Since Air Peace’s flight will be going empty, it’s fair to pay for return which is $620. Otherwise, Turkish Air should be allowed to convey our brothers and sisters. They’d of course be required to comply with health measures.”