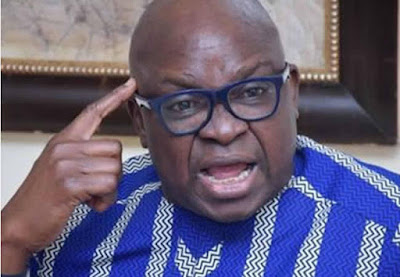 The Ekiti State House of Assembly says it will invite former Governor Ayodele at the appropriate time to make clarifications on some financial dealings he undertook during his reign in the state.

The Assembly clarified that a committee has been set up to discuss the issue of invitation to Fayose and that the summons will be extended to the former governor at the right time.

An invitation to Fayose on the passage of N10 billion supplementary budget, 30 days to his exit on October 15, 2018, was discussed on the floor of the House last year, a move which prompted the former governor storming the Assembly complex uninvited in December 2019, to clarify issues, but he was resisted.

The Assembly also disclosed that the All Progressives Congress(APC) dominated legislature, has passed 19 out of 25 bills presented before it by the executive in the last one year.


The Assembly also passed a motion mandating the executive to rename Ekiti State Civic Centre, still under construction as the John Kayode Fayemi Cultural Centre in honour of Governor Kayode Fayemi for his unwavering dedication to the service of Ekiti people.

The motion was moved by a lawmaker representing Moba 1, Hon. Adeyemi Ajibade and seconded by his colleague from Ikole II, Hon. Adeoye Aribasoye and adopted by the whole house.

At a press conference after the plenary presided over by the Speaker, Hon. Afuye, the Chairman House Committee on Media and Public Affairs, Hon. Yemisi Ayokunle said Fayose had not been formally invited by the Assembly.

“We didn’t invite him but we were about discussing his issue when he came in here as a meddlesome interloper.

“There was a committee in place already deliberating on his issue. We are not in a hurry and when the time comes, we will give an update about his invitation to the public”.

The lawmaker praised Fayemi for putting up structures that facilitate robust executive-legislature smooth operation in the state, describing him as worthy of being immortalised.

“The motion moved on the renaming of the civic centre after Governor Fayemi speaks for itself and once all the lawmakers have agreed through a voice vote, we are going to pass our resolution across to the executive to effect this change.

Ayokunle stated that the already passed and assented bills were those that had smoothened governance for the executive and increased democratic dividends to the people.

The lawmaker added that the Assembly has been thorough in the discharge of its oversight functions across Ministries, Departments and Agencies of government as well as local governments to ensure financial probity.

He added that six other bills are at different stages of legislative procedure and will be passed soon for executive assent.

“17 motions were passed into resolutions and it involved those that were executed by the executive to address emergency situations that will be for the benefit of all citizens”.