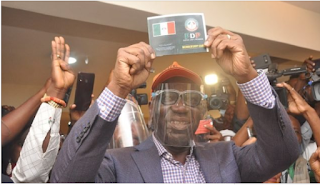 Chairman of the Peoples Democratic Party (PDP), in Edo State, Dr. Anthony Aziegbemi, has confirmed that three of the four aspirants of the party have stepped down for Governor Godwin Obaseki.

This is even as prominent members of the party have thrown their weight behind the re-election of Obaseki, in the 19 September gubernatorial election.

Aziegbemi, who gave this indication on Thursday evening at the Samuel Ogbemudia Stadium, venue of the party’s primary election, added that “Governor [Obaseki] is now the consensus governorship candidate of the party.”

Imasuagbon, who had earlier insisted the primary election must go on as scheduled, reportedly embraced peace only a few hours to the commencement of the primaries.

Aziegbemi, however, said the most important thing was that aspirants stepped down and that it did not matter when they stepped down.

“It is doesn’t matter whether aspirants stepped down, two weeks ago, yesterday, this morning, afternoon or not.

“But what I just told you is that all the aspirants have stepped down. We now have the governor, the only aspirant,” Aziegbemi said.

The Edo PDP Chairman, however, said delegates of the party from the 192 wards in the state must still participate in the voting process, to satisfy the requirements of country’s electoral act.

“What we are going to do here now is that in accordance with the electoral act there must be a voting process again. With the act, we must still go to the voting process.”

Speaking on the likely outcome of the governorship election, a former member of the House of Representatives, Omosede Igbinedion, said she “believe that the people of Edo will return Governor Godwin Obaseki for a second term.

“Edo people will come out en-mass and vote for Obaseki, the people are strongly behind him.

“I am sure that 90 per cent of Edo people will vote him in the September 19 governorship election.”

Also speaking, Mr. Mike Oghiadome, a former a Chief of Staff to former President Goodluck Jonathan, said that the coming of Governor Obaseki would further strengthen the PDP.

“Before now, the PDP has two Senatorial seats and the All Progressives Congress (APC) has only one. This is an indication that the PDP is even stronger now with Obaseki,” he said.

On her part, the chairman of Etsako East local government area, Mrs. Ebuehi Benedicta, noted that Obaseki’s popularity among the people would win him a second term.

“No doubt that PDP will return him, he is loved by the people, he has worked for us as Edo people.”