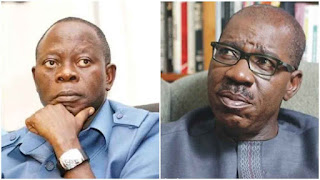 The National Chairman of the All Progressives Congress (APC), Adams Oshiomhole, has said the party followed its constitution in disqualifying Edo State Governor, Godwin Obaseki.

Obaseki was on Friday, disqualified from contesting in the APC primaries, ahead of the forthcoming governorship election in the state.

Oshiomhole, speaking on Channels Television, said the party’s decision was subject to appeal.


“The purpose of the screening is to take nothing for granted. And until they go through the appeal process, I as the National Chairman cannot comment on it,” Oshiomhole said.

Obaseki on his part, rejected the disqualification and has made it clear he will not appeal the committee’s verdict.

The Governor is rumoured to be considering defecting to the Peoples Democratic Party (PDP), who have expressed an interest in accepting him back.