Edo election: How Obaseki tortured us in APC – Osagie 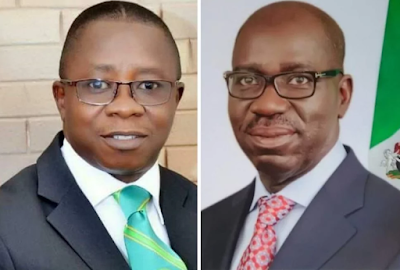 The former member representing Orhionmwon/Uhunmwonde Federal Constituency at the House of Representatives and Minority Whip, Samson Osagie, has said the reign of Governor Godwin Obaseki in the Edo State chapter of the All Progressives Congress was a very rough and tough one before his defection to the Peoples Democratic Party, PDP.

He said this while reacting to the successful conduct of the just-concluded APC’s primary in the state.

He alleged that Obaseki’s reign in his former party was tough for every party member., hence they prayed never to have such a person as a governor in the state again.

“We have been through a lot of troubles since his election to the post of governor of our dear state, it has been a tough rough journey for the party as a whole and we pray and hope we will never experience the kind of torture we went through him”, he said.

“Obaseki is not qualified to participate in the exercise, he joined the party last week, sale of forms have been concluded, including screening of aspirants. Ogbiede Ihama is exercising his legitimate right.

While commenting on the outcome of the primary, Osagie noted it was the first time in the history of the state that there was no rancor after the exercise

“Congratulations to APC members in Edo state for the successful completion of the governorship primary by direct election across board. With the kind cooperation of other aspirants,

Pastor Osagie Ize-Iyamu emerged as the candidate, this is one occasion where a party candidate emerges peacefully without rancour”, he said.