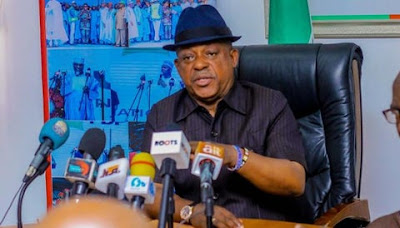 The National Chairman of the Peoples Democratic Party, Prince Uche Secondus, has said the party has the strategy that will enable it to win the Edo governorship election.

He said a committee was being set up to harmonise different strategies to enable them to win the election, noting that the party will explore the crisis rocking the All Progressive Congress to win the governorship election.

Secondus, who spoke with newsmen, said his party was popular in the state and would capitalise on the crisis rocking the APC to build on the performance of the PDP in the last general election.

He said, “We have the strategy that will give us victory in the election. We are already putting good heads together to harmonise the many strategies we have on the election.


“Out of the three senators from the state, we have two and we have four out of the nine members of the House of Representatives. Yet, the state had a sitting governor who was a member of the APC then. At that time, there was no crisis or division within the APC. Now, the centre cannot hold as both the national chairman and the governor do not see eye-to-eye.”

He said the party had set up a five-member committee headed by the Governor of Adamawa State, Ahmadu Fintiri, to handle the election of three ad hoc ward delegates in the 192 wards in the state. Other committee members are Governor Douye Diri of Bayelsa State; Mrs Mobolaji Lamuye, Chukwwuma Onyema and Senator Samuel Anyanwu.

The exercise holds in the state on Tuesday.

There are two factions of APC in the state and they have been at each other’s throat over the preferred party candidate for the September 19 governorship election.