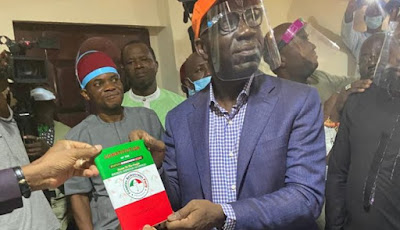 After what looked like endless court cases building up to the Peoples Democratic Party (PDP) governorship primary in Edo State, the die is now finally cast.

Incumbent Governor Godwin Obaseki will slug it out with Kenneth Imansuangbon at the indirect governorship primary election which holds today at the Samuel Ogbemudia Stadium, Benin, the state capital.

Recall that an aspirant, Omoregie Ogbeide-Ihama, who earlier obtained a Federal High Court order to stop Obaseki from the PDP primary, withdrew his case and stepped down yesterday.

Imansuangbon had declared that he would not step down for the governor.

Ogbeide-Ihama, who opted for an out-of-court settlement, said he listened to highly-respected Edo elders.


He expressed his commitment to PDP’s growth, saying his action was in the party’s interest and that he remained loyal.

Ogbeide-Ihama, a House of Representatives member, who represents Obaseki’s Oredo constituency, insisted that his action was not an affront to the PDP or its leadership.

He said it was an attempt to save Edo PDP from making a major blunder that could lead to lawsuits, with a possibility of disqualifying the party from participating in the September 19 poll.

He said: “A dispassionate and critical look at the process adopted to allow him (Obaseki) participate in the shadow poll would show that probably as a result of the rush to make it happen, a couple of illegalities might have been made, which could create legal loopholes for our opponents or aggrieved parties to exploit.

“It is expected that we learn lessons from the situation in the last elections, with the opposing party in Zamfara and Rivers states.

“Sentiments must never override due-process, justice, equity and legality. Established rules should not be twisted or broken at the whims and caprices of anyone who feels like it, for whatever reason. No serious system will thrive in such practices.”

He said he would support whoever emerges the candidate.

“A well-conducted process will produce a candidate. Whoever that candidate is will have my full support as has been my antecedent in the party; but as I have always promoted, let the right process be followed.

“We must do what is necessary to protect the stable Edo PDP we have worked tirelessly for, this last couple of years,” he said.

Ogbeide-Ihama urged his supporters to disregard falsehoods being spread that his action was sponsored by forces to frustrate Obaseki or that it was for pecuniary gain.

“Such things have never deserved my attention or response. As I have always said, such crude and unrefined politics remain beneath me,” he said.

Ogbeide-Ihama had prayed the court to stop PDP from allowing any member other those earlier screened to partake in the primary.

Justice Emmanuel Obile of the Federal High Court struck out the suit after parties confirmed they had settled out of court.

The court had earlier stood down the matter for three hours as lawyers on both sides discussed.

When the court reconvened, parties informed the court that they had settled.

Striking out the case, Justice Obile said: “I commend the counsel and parties for settling out of court as it is the proper thing to do.”

No fewer than 2,229 delegates are expected to vote in the primary.

PDP spokesman Kola Ologbondiyan said all sensitive materials had been dispatched to Edo.

Ologbondiyan added that the exercise would be conducted in strict compliance with COVID-19 protocols.