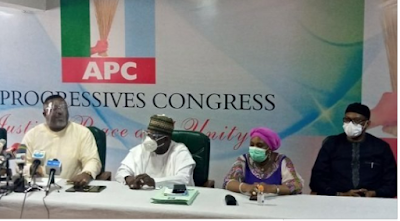 Members of the dissolved national working committee (NWC) of the All Progressives Congress (APC) say they are consulting with stakeholders and a team of lawyers on the next line of action.

The NWC was dissolved at a national executive committee (NEC) meeting of the party that was held at the presidential villa on Thursday.

A caretaker committee chaired by Mai Mala Buni, Yobe governor and former national secretary, was set up in place of the dissolved NWC by the highest decision making organ of the party.

At the meeting, President Muhammadu Buhari warned that there would be dire consequences for any member who chooses to ignore the party’s directives.

The NEC meeting was convened by Victor Giadom, former deputy national secretary of the party, who had announced himself as acting chairman before the dissolution of the NWC.

In a statement on Thursday, 18 members of the former NWC said Giadom did not have the authority to call for a NEC meeting.

They said article 25(B) of the party’s constitution provides that only the chairman or the NWC has prerogative to call for a NEC meeting.

They argued that the party’s constitution makes it compulsory that a minimum of a 14-day notice is given for quarterly meetings and seven days for emergency NEC meetings.

“We note that chief Victor Giadom had convened and conducted a virtual meeting purportedly to be a NEC meeting of our party wherein certain far reaching decisions were purportedly reached,” the statement read.

“While the NWC is studying the unfolding drama, it will be consulting with stakeholders and a team of lawyers on the next line of action.”

Some of those who signed the statement are; Hilliard Eta, Waziri Bulama and Lanre Issa-Onilu.

The late Abiola Ajimobi, who was deputy chairman (south), was also listed on the statement. Coincidentally, his death was announced on the same day the NWC was dissolved.

The leadership crisis in the party began after the appeal court upheld the suspension of Adams Oshiomhole as APC national chairman.

While Ajimobi was announced acting chairman following Oshiomhole’s suspension, Giadom said he was in charge of the party.