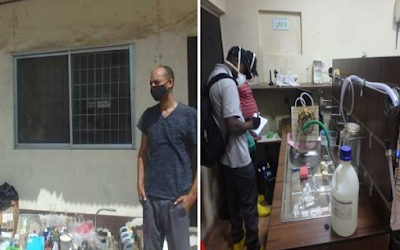 A dual citizen of Nigeria and Denmark, Oladapo Ifedayo Oluseyi, was on Monday brought before a Federal High Court in Lagos for unlawfully dealing in hard drugs.

Oluseyi, also known as Dayo, was arraigned by the National Drugs Law Enforcement Agency (NDLEA) on a four-count charge of conspiracy, unlawful cultivation of, dealing in hard drugs and unlawful possession of the said banned substance.

According to NDLEA prosecutors Augustine Nwogu and Jonathan Igwubor, the defendant was arrested on May 18, 2020, at 7, Imam Augusto Close, Victoria Island, Lagos.

The NDLEA told Justice Nicholas Oweibo that the defendant was found in possession of 1.127 kilogrammes of cannabis cream; 83 grammes of hashish oil: 123mg THC-70mg CBD and 21kg of cannabis infused ethanol.

The court also heard that he allegedly unlawfully engaged in the buying of equipment meant for a clandestine laboratory which he established in his building for the production and or manufacture and extraction of the said hard drugs.

The crimes, according to the NDLEA, contravened the United Nations Single Convention on Narcotic Drugs 1961 and its Protocols and the Convention Against Illicit Traffic in Narcotic Drugs and Psychotropic Substances 1989, (as contained in the Second Schedule of the NDLEA ACT, 2004).

The defendant pleaded “not guilty.”

Justice Oweibo admitted him to bail in the sum of N5 million with one surety in the like sum.

The surety must be a tax payer with landed property within the court’s jurisdiction, while the defendant must deposit his Nigerian and Danish passports with the court

Justice Oweibo remanded the defendant in NDLEA custody pending perfection of the bail conditions and adjourned till November 5, for trial.