Crisis in Presidency: You are exposing your husband – Bamgbose begs Aisha Buhari 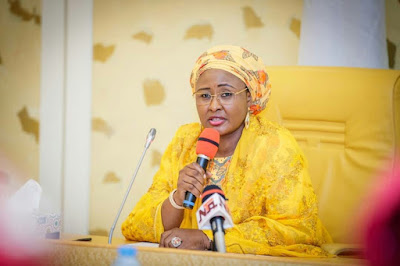 Bamgbose said that in as much he respects the First Lady’s feelings of being allegedly neglected by some of her husband’s aide, further publicizing the issue may jeopardize the reputation of the President.

An incident of gunshots at the Presidential Villa involving the First Lady, members of her immediate family, her Aide-de-camp, Usman Shugaba and Sabiu Yusuf, a Special Assistant to President Muhammadu Buhari.

The shooting incident which experts described as security breach, led to the arrest of Aisha’s Aide-de-camp and others.


Recall that Mrs Buhari had last Friday cried out over the arrest and detention of her Aide-de-camp by the Inspector-General of Police.

And Bamgbose, in a statement  on Monday, also said the First Lady was to demand for the release of her Aides.

This is as the Presidency yesterday quoted the President as saying that the law would be allowed to take its course on the matter.

Bamgbose added, “There is no doubt that the family of the first family deserves honour and respect.The First Lady deserves to be respected and honored.

“Aisha Buhari should however be urged, to stop further tweeting or publicizing her grievances. One cannot but respect her feelings of being neglected, however, further publicizing the issue may jeopardize the reputation of the President himself.

“One would have expected, that the Chief of Staff or the Interior Minister, should have handled this matter before it escalated. The Inspector General of Police I know is a disciplined senior Police Officer.

“He has at least refused the temptation, to join issues with the First Lady on pages of newspapers. This is highly commendable.

“It’s most likely that IGP’s hands are tied by superior authority. However, I will expect the Chief of Staff to the President, and the Interior Minister to wade into the matter and ensure the Aides are released without further delay.

“The IGP should do his best to protect the respect and honor accorded the first family. One would however urge the First Lady not to further join issues with the IGP pending the amicable resolution of the matter.

“I’m convinced that before weekend the Aides will be released to her. It’s a matter that should be resolved privately and not publicly.”