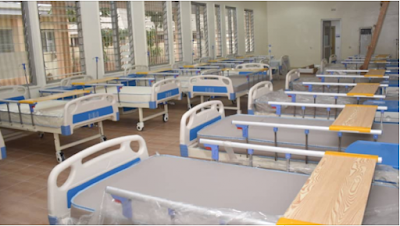 Rayfield Medical Services Limited, a private hospital in Plateau state, has been reportedly shut down over breach of COVID-19 protocol.

According to PUNCH, the private hospital was closed on the orders of the state task force on COVID-19 after it was discovered that an infected patient who had earlier absconded from one of the state’s isolation centres was being treated at the hospital.

A health worker at the hospital was quoted as saying the patient, on arrival at the hospital, denied having any symptoms of the disease and having been in contact with any COVID -19 patient.

The patient was said to have been managed for two days at the hospital before the truth was discovered.

The source reportedly said that further tests carried out showed that some staff of the hospital were also positive for the disease.

“A COVID-19 patient absconded from one of the state hospitals and came to us for treatment for an unrelated illness,” the health worker was quoted to have said.

“The patient was managed for two days in our facility before we discovered the true state of affairs from the state ministry of health.

“The patient was immediately evacuated by the ministry of health officials to the isolation facility and the hospital fumigated.

“Screening of primary and secondary contacts revealed that a number of our staff were also positive for the virus. They are also being attended to by the state ministry of health officials.

“In line with the state protocols, the hospital services have been suspended for two weeks and the entire facility closed for fumigation.

“We hope to resume normal services to the general public immediately after the expiration of the mandatory two weeks.”

The state has confirmed 168 cases of the disease.