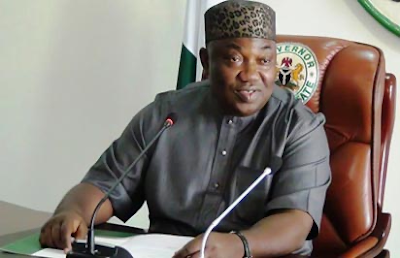 Governor Ifeanyi Ugwuanyi of Enugu State, in furtherance of his administration’s efforts to upgrade and rehabilitate health facilities across the state, on Friday, inspected the dilapidated facilities at the General Hospital Oji-River, which has a section designated as leprosy services settlement centre.

Gov. Ugwuanyi, who expressed dismay at the state of the facilities at the hospital, having been neglected for many decades, promised that his administration will, as a matter of urgency, carry out major upgrade and rehabilitation works at the health facility.

The General Hospital Oji-River, formerly known as Leprosy Mission Hospital, according to the Permanent Secretary, State Ministry of Health, Dr. Ifeanyi Agujiobi, who was among the dignitaries that received the governor on arrival, was established in 1954 by the then Church Missionary Society (CMS), now Anglican Church.


Speaking further, Gov. Ugwuanyi pointed out that the outbreak of the Coronovirus Disease (COVID-19) pandemic has reset the world thinking about health, disclosing that the minimum his administration can do is to upgrade and rehabilitate health facilities in the state.

The governor, who also inspected the Agbalenyi/Enugu-Onitsha Expressway link road, newly reconstructed by his administration, reiterated the state government’s commitment to quality and affordable health care delivery in the state and assured the jubilant people of Oji River Local Government Area that work will soon commence on the hospital.

Stakeholders of Oji-River LGA who received the governor include the Member representing Oji-River Constituency in the State House of Assembly, Hon. Jeff Mbah, the State Commissioner for Youths and Sports, Hon. Manfred Nzekwe, the Council Chairman, Hon. Franklin Udemezue, the acting State Secretary of the Peoples Democratic Party (PDP), Cletus Akalusi, the immediate past Chairman of the Council, Hon. Harrison Okeke, former Majority Leader of the House of Assembly, Hon. John Obidinma, Mrs. Joy Odike, traditional rulers, among others.