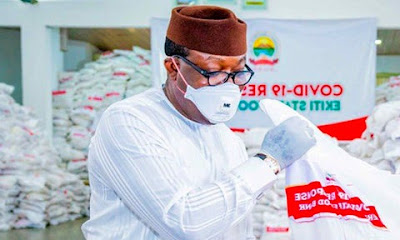 Governor Kayode Fayemi of Ekiti State has maintained that religious centres and event centres in the state remained shut.

The Federal Government on June 1 lifted the ban on mosques and churches in the country after some weeks of closure as part of measures to curb the spread of the coronavirus pandemic.

The state Attorney General and Commissioner for Justice, Olawale Fapohunda, had said a committee set up by the state government would work out modalities for the reopening of the places of worship.

But in an update on Wednesday, the state Commissioner for Information and Values Orientation, Muyiwa Olumilua, said in a statement that the ban on mosques, churches, and other public places in the state is still effective.


He said, “The attention of the Government of Ekiti State has been drawn to the apparent disregard by some residents for the Executive Order 7 directive, banning public gatherings larger than 20 persons, be it social, political, or religious events in the state.

“Members of the public are urged to take note that though movement and business activities are allowed from Monday to Friday, the ban on large gatherings is still in force in the state.

“Dusk to dawn curfew, inter-state travel, and the ban on social events like birthday parties, religious gatherings (in churches and mosques), festivals, political party meetings or rallies, as well as any other gathering of more than 20 persons, have not been lifted in Ekiti State.

“Residents are also advised to take personal responsibility for their protection while going about their daily duties, by observing preventive measures of washing of hands frequently with soap under running water, wearing face masks, and maintaining social distancing.”

The commissioner noted that defaulters would be prosecuted, as the state government is committed to curtailing the spread of the virus in the state.