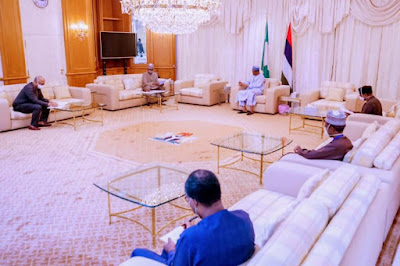 The Chairman, Presidential Task Force on COVID-19, Boss Mustapha, has urged Nigerians to thank God for the country’s low mortality rate being recorded following the community spread of the deadly Coronavirus pandemic.

Mustapha said this when he briefed State House correspondents after a closed-door meeting with President Muhammadu Buhari at the Presidential Villa, Abuja, on Monday.

“We should remain grateful to God why the mortality is not very, very high – is a thing that it should be subject of even study because we have the same climatic environment with countries like South American countries like Brazil.

“Thee rate of mortality in other countries falls within the bracket of about five-point-something while ours is about two-point-four and two-point-five per cent mortality.

“The age bracket in Nigeria is between 31 and 40, years and that is a very, very active age.
“Those are the ones that within the percentage of about 80 per cent can wither the infections; some will show mild symptoms and not take ill severely.

the 774 local governments as high burdened with 60 per cent rate of the reported 24,077 infections in the country.

“PTF has identified 18 Local Governments out of the 774 local governments that are considered to be high-burdened with this infection, they account for 60 per cent of the 24, 077 infections,’’ he added.

Mustapha was accompanied by Minister of Health, Osagie Ehanire, the Coordinator of the PTF on COVID-19, Dr Sani Aliyu and the Director-General of the National Centre for Disease Control (NCDC), Dr Chikwe Ihekweazu.