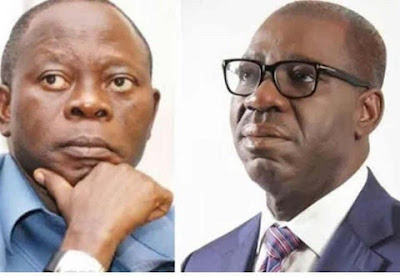 The Federal High Court in Abuja, on Wednesday, extended the interim order barring governor Godwin Obaseki, from arresting the suspended National Chairman of the All Progressive Congress, APC, Adams Oshiomhole over his alleged indictment by a panel of inquiry.

Justice Ahmed Mohammed ordered all the parties involved in the matter to stay action till June 29 when the court will hear a motion challenging its jurisdiction to entertain the application Oshiomhole filed for the protection of his fundamental human rights.

Aside Governor Obaseki, other Respondents in the matter are; Edo State government, the Attorney- General and Commissioner of Justice of Edo state, Chairman of the panel of inquiry, Justice J. Oyomire, the Inspector General of Police and the Department of State Service.

It will be recalled that the court had in a ruling on June 1, restrained both governor Obaseki and the other Respondents from taking steps to arrest Oshiomhole who is a former of the state, over the report of the Justice Oyomire-panel that indicted him for corruption and diversion of public funds.

Trial Justice Mohammed directed the parties to maintain status quo, pending the determination of the issue of jurisdiction.

The interim order followed an ex-parte application the embattled APC National Chairman filed through his team of lawyers led by Mr. Ehiogie West-Idahosa.

He had prayed the court to stop his arrest and prosecution on account of a White Paper that was issued against him by the panel of inquiry the Edo state government constituted to probe him.

Meanwhile, at the resumed proceeding on Wednesday, Oshiomhole’s lawyer, West-Idahosa, notified the court that he filed a counter-affidavit to dismiss the preliminary objection the Respondents raised against the suit.

He said the counter-affidavit was served on all the Respondents, except the 6th.

On his part, counsel that represented the 1st to 4th Respondents, Mr. Kingsley Idahosa, confirmed to the court that with processes were served on him before the proceedings commenced.

He, therefore, requested for time to study the counter-affidavit with a view to identifying areas that would require his clients to respond.

Consequently, Justice Mohammed adjourned the case to June 29, even as he restated the earlier order barring any of the parties from taking steps that could jeopardize the subject matter of litigation.