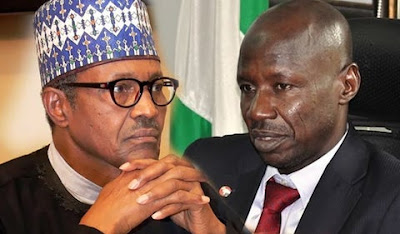 President Muhammadu Buhari has been able to get the 9th Senate to confirm at least 207 appointees for him in the last one year of the existence of the current Senate.

The 207 already confirmed include judges, ministers, ambassadors, commissioners and heads of agencies.

However, Buhari has not considered the re-appointment of the acting Chairman of the Economic and Financial Crimes Commission, Ibrahim Magu.

Magu was appointed by the President on November 9, 2015 subject to confirmation by the Senate. But he has remained in acting capacity since then.


He was rejected twice by the 8th Senate, under the leadership of Dr Bukola Saraki, based on a security report by the Department of State Services. He, however, remained in office.

Saraki’s tenure as Senate President was characterised by a frosty relationship between the Presidency and the National Assembly.

However, since the inauguration of the 9th Senate led by Ahmad Lawan on June 11, 2019, Buhari has sent the names of 200 individuals to the upper chamber for confirmation but has not sent that of Magu.

This is despite assurances by Lawan that the Senate would act swiftly if Magu’s name is forwarded to the Senate for approval.

When the Chairman of the Presidential Advisory Committee on Anti-Corruption, Itse Sagay, paid him a visit at the National Assembly Complex in Abuja on November 21, 2019, Lawan said there was no request before the 9th Senate for the confirmation of Magu.

Magu is expected to retire from the police force in the next 23 months when he would have turned 60.

The 9th Senate, which prides itself as friendly towards the executive, has rejected the confirmation of only one of Buhari’s nominees in the last one year and she was rejected because of her refusal to show up for screening.

In July 2019, Buhari wrote the Senate seeking the confirmation of the Chief Justice of Nigeria, Tanko Muhammad, which was swiftly granted.

Two weeks later, the President nominated 43 persons to be confirmed by the Senate as ministers. They were all confirmed within a week with many of them being asked to “take a bow and go”.

In September 2019, the upper chamber received a request for Adeleke Adewolu to be confirmed as an Executive Commissioner of the Nigerian Communications Commission to replace Sunday Dare, who had resigned to take up a ministerial appointment. The request was granted.

The following month, Buhari sought the confirmation of 16 nominees for the board of the Niger Delta Development Commission. They were all confirmed, except Joy Nunieh of Rivers State for failing to appear for screening. Those confirmed have, however, not been inaugurated to date.

In November 2019, the Senate confirmed the nomination of Justice John Tsoho as the Chief Judge of the Federal High Court, based on the President’s request.

For December 2019, the Senate approved 13 nominees as chairman and commissioners of the National Assembly Service Commission. The nominees were inaugurated by the President.

In the same month, Buhari got the Senate to approve 18 nominees for the National Hajj Commission of Nigeria, with Alhaji Zikrullah Hassan as chairman.

In December 2019 as well, the President asked the Senate to confirm the appointment of Muhammad Nami as chairman and 11 others as members of the board of the Federal Inland Revenue Service, while Edward Adamu was confirmed the Chairman, Asset Management Corporation of Nigeria.

In January 2020, Buhari sought the confirmation of the appointment of Kingsley Obiora as the Deputy Governor of the Central Bank of Nigeria, as well as Musa Nuhu as the substantive Director-General of the Nigerian Civil Aviation Authority

The President also sought the confirmation of the appointment of Adeolu Akande as the Chairman of the Governing Board of the NCC and Uche Onwude as a member (South East) of the board.

All the nominations of January were endorsed by the upper chamber.

In April 2020, Buhari wrote the Senate for the confirmation of 38 persons to the board of the Federal Character Commission with Muheeda Dankaka as chairman. On the same day, he forwarded seven nominees for the membership of the Revenue Mobilisation Allocation and Fiscal Commission.

For the month of May 2020, he sought the Senate’s approval for the confirmation of 42 ambassadors, which was granted.

In June, the Senate approved the President’s request to confirm Lamido Yuguda as the Director-General of the apex capital market regulator, the Securities and Exchange Commission.

Three others were also confirmed as SEC commissioners.

In June 2020, the Nigerian Senate confirmed the appointment of two non-executive directors for the Nigerian Deposit Insurance Corporation and three members of the Board of Nigerian Law Reform Commission.

In the same month, the Senate confirmed Monica Dongbam-Mensem as the President of the Court of Appeal.

Also in June 2020, Buhari wrote the Senate for the endorsement of Prof Umar Danbatta as Executive Vice Chairman and Chief Executive Officer of the NCC.