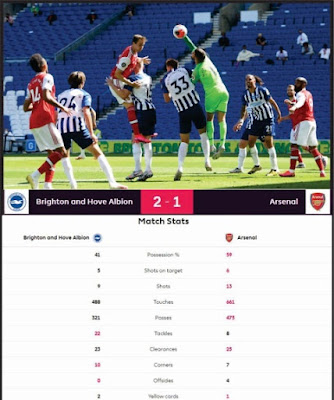 Brighton came from a goal down to hand Arsenal their second successive defeat since the resumption of the league.

Neal Maupay struck deep into added time to complete Brighton’s comeback over Arsenal with a 2-1 victory at the Amex.

The Frenchman finished an incisive team move to fire past back-up goalkeeper Emiliano Martinez in the 95th minute and inflict a second defeat on the Gunners in four days.

Maupay's performance was not without controversy, as a coming together with first-choice shot-stopper Bernd Leno resulted in the German falling awkwardly and being stretchered off in the first-half.

And following his late winner, tempers flared over and he was confronted by Arsenal players.

After a first-half in which neither side looked likely to score, the game came alive in the second 45 minutes with a moment of individual brilliance from Nicolas Pepe.

The Ivorian found space on the right of the box and whipped a curling effort into the top corner to give the Gunners the lead.

But the visitors were ahead for only seven minutes as Dunk pounced on a loose ball from a corner to draw the Seagulls level.

And late tactical changes by Brighton boss Graham Potter led to Maupay securing a valuable three points in the relegation battle at the death.

Substitutes Aaron Connolly and Mac Allister were vital to the move which brought the winner after the Seagulls switched to two up front.

Elsewhere, Yves Bissouma picked up the Man of the Match award for a tireless performance in midfield, while Bukayo Saka was the standout man for the visitors.

The result lifts Brighton five points clear of the drop zone, while the Gunners are ninth and winless since the league's restart.