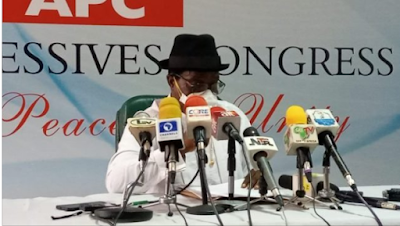 A high court in Rivers state has restrained Victor Giadom, national secretary of the All Progressives Congress (APC), from parading himself as the acting national chairman of the party.

The ruling is coming a day after a court of coordinate jurisdiction reaffirmed him as acting national chairman of the party.

The ruling of a high court in the federal capital territory (FCT) on Thursday was sequel to an ex parte motion filed by Mustapha Salihu, national vice-chairman north-east.

S. U Bature, the judge, held that his ruling would subsist pending the time the national executive committee (NEC) convenes and takes a decision or determination of the suit.

However, Salihu whose name is on the court order as an applicant, expressed shock over the ruling, saying he has moved on.

The Rivers high court based its ruling on the fact that Giadom resigned his position to contest as running mate to Tonye Cole, a governorship aspirant in the 2019 general election.

Unfortunately, the APC crisis prevented the party from fielding candidates in the elections.

On Wednesday, Hilliard Eta, APC vice-chairman south-south, told reporters that Gaidom could not be chairman of the party because he has since ceased to be a member of the NWC.

Eta said party stakeholders in the south-south have not represented him to be a part of the NWC.

“Chief Victor Gaidom has long ceased to be a member of the NWC. He has voluntarily resigned his membership to be able to contest as deputy governorship candidate of our party,” he had said.

“And, at no time, I supretend over the south-south, and at no time did I present Giadom again to come to the NWC. You can check all the records and you will see that this is the fact.”

TheCable reports that on Friday that the management of the party has asked Gaidom to return officials cars and laptops in his possession.