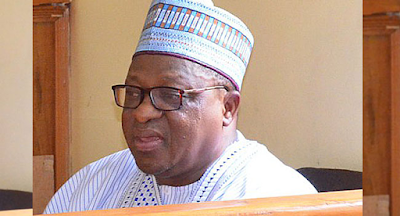 Gunmen alleged to be kidnappers have again abducted the father of the former Governor of Plateau State, Joshua Dariye.

Recall that Pa Defwan Dariye who is said to be in his early nineties was in February 2015 kidnapped at his residence in Mushere, Bokkos Local Government Area of the state but he later regained his freedom a few days after he was saved by vigilante at the Nasarawa /Plateau boundaries.

It was gathered on Friday that in the latest kidnap case, the gunmen also went to his house in Mushere Community and took him away to an unidentified destination.

A resident of the community, Bulus Gambo confirmed the abduction of the former Governor’s father to on Friday.


Gambo said ” The Information is true. It happened in the early hours of Thursday.  The old man was just in his house when some gunmen came and took him away. Right now the community is in sober mood over the incident ”

An aide to the Chairman of Bokkos Local Government Area, Magit Mangut Mafiyai also confirmed the abduction of the former Governor’s father.

Mafiyai said that the Council Chairman, Yusuf Mahanan Machen had visited the home of the abducted victim and asked the security agencies to be proactive and do everything within their powers to rescue him.