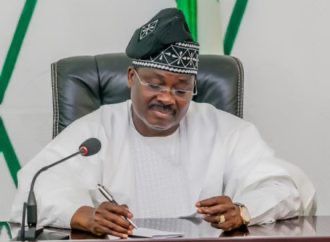 Nigerianeye can confirm that immediate past governor of Oyo State and acting chairman of the All Progressives Congress (APC), Senator Abiola Ajimobi is dead.


The 70-year-old, who had been on a life support machine since last Friday at First Cardiology Hospital in Ikoyi, Lagos, after slipping into a coma following Coronavirus complications, finally died on Thursday,.

Recall that a reliable source close to the ex-governor had  on Monday disclosed that Ajimobi had been on life support machine after he slipped into a deep coma and may not make any recovery going by the observations of medical experts around him.

The source further disclosed that the former Oyo governor had a lung surgery since being rushed to the Lagos hospital but made no progress while his kidneys had also failed.

Doctors treating Ajimobi, it was reliably gathered, last Friday informed his family that his situation had defied every medical intervention and that only a miracle could bring him back to life.

Those projections came true on Thursday as the ex-governor finally succumbed to the virus that has also killed several prominent Nigerians including late Chief of Staff to President Muhammadu Buhari, Abba Kyari, who was also treated for the disease at First Cardiology Hospital until he died.


Ajimobi’s condition was managed privately but many developed interest in his whereabouts following his absence at public events, especially at the national working committee (NWC) meetings of the All Progressives Congress (APC).

In March, he emerged deputy national chairman of the ruling party in the south-west but he was not involved in strategic meetings held ahead of the Edo and Ondo elections.

When an appeal court in Abuja upheld the suspension of Adams Oshiomhole as national chairman, Ajimobi was appointed in acting capacity.

Due to his absence, Hillard Eta, vice chairman (south-south) was asked to stand in for Ajimobi.

The party’s NWC has been dissolved while a caretaker committee has taken over.

When Seyi Makinde, governor of Oyo, was receiving treatment for COVID-19, his predecessor was among those who expressed solidarity with him.

He had commended Makinde for making the people know he tested positive for COVID-19, saying the disease is not a death sentence.

“Immediately I heard that my brother, Gov. Seyi Makinde’s test came back positive, I sent him a text message to express solidarity with him and wish him quick recovery, and God’s protection,” Ajimobi had told reporters.

“I also want to appreciate him for his bravery with this revelation. I know with adequate care he will get over it. I wish him a quick recovery.

“COVID-19 is not a death sentence, people have recovered from it. We will get over this too, but we must continue to ensure that we follow all safety measures.”

A former senator, Ajimobi goes into history as the only person who has served two terms as Oyo governor. He governed the state between 2011 and 2019.