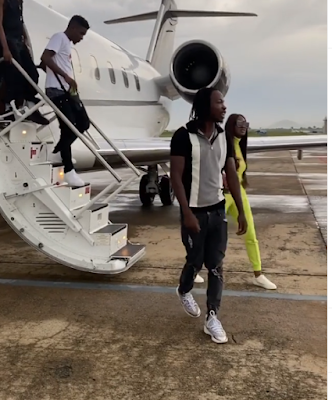 Hadi Sirika, the minister for aviation, says the flight that conveyed Naira Marley to Abuja for a concert was approved for a different purpose.

The minister for aviation, Hadi Sirika, who made this known during the daily COVID19 briefing said that the flight was approved for a different purpose.

Sirika said that the flight was initially approved to convey a serving Justice from Lagos to Abuja adding that the company has been suspended indefinitely for providing false information to convey the singer to Abuja for the show.

The Minister also said that the flight captain will equally be sanctioned for providing false information.

Speaking during the daily briefing on the presidential task force on COVID-19 on Monday, Sirika said the flight company has been suspended indefinitely.

He also said the flight captain will be sanctioned for providing false information.

According to the minister, the flight was approved to convey Adefope Okoji, a justice, for an official assignment.

“We considered judiciary as an essential service to be delivered. The approval was for June 14, 2020, however, we gave a leeway of 24 hours because due to operational reasons they may choose to fly earlier or later,” he said.

Sirika also read the letter which contained approval for the flight and emphasised on the parts which read “ensure that this operation is strictly and diligently based on the protocol guiding the operation under COVID-19”.

“The operation is a clear violation of our approval to which we take very seriously. Execujet Services is hereby suspended indefinitely. We will also fine them maximumly according to the law,” he continued.

“The captain of the flight would also be sanctioned for giving wrong information to the control tower and also appropriately in accordance with our law.

“We don’t take things lightly in civil aviation because it means the lives of people. We are highly regulated”

Sirika said aviation authorities would escalate the mechanisms already put in place for flight approvals to deter people from contravening laid down rules.

Recall that the development was triggered by the Naira Marley’s ‘Drive-in’ concert which was held on Saturday night at Jabi Lake Mall.

The event attracted criticism from Nigerians as the attendees were clustered in a viral video while Naira Marley performed despite an increase in coronavirus cases.