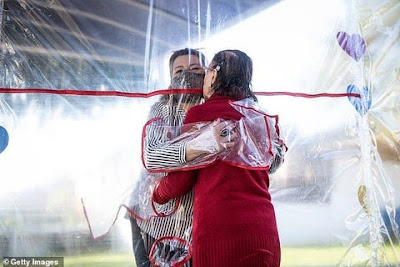 Brazil has become the second country in the world to hit one million coronavirus cases after infections soared by 54,000 in one day.

The South American country recorded more than 1,200 deaths for the fourth consecutive day bringing the total to nearly 49,000 yesterday.

It comes two months after the US reached the one million mark and just days after the Pan American Health Organization (PAHO) Director Carissa Etienne said Brazil was a major concern.

A lack of testing in the country with a population of 209 million has led experts to suggest the real figure could be much higher.


Hours before the latest figures were revealed the World Health Organisation’s director-general Tedros Adhanom Ghebreyesus warned the coronavirus pandemic was entering a ‘new and dangerous’ stage.

He said cases were rising at the same time as people are growing weary of lockdowns and governments are seeking to restart their economies.

Walter Braga Netto, the head of the office of the Brazilian president’s chief of staff, known as Casa Civil, and one of the top officials handling the crisis, has previously said it was under control in the country.

‘There is a crisis, we sympathize with bereaved families, but it is managed,’ said Braga Netto, who spoke during a webinar held by the Commercial Association of Rio de Janeiro.

Braga Netto said Brazil’s deaths-per-million-people figure was better than that of Belgium, Spain, the United Kingdom, Italy and France. As such, the Army general said he ‘was trying to convey a message of optimism in the management of the crisis.’

Latin America’s largest country accounts for about a quarter of the roughly four million coronavirus cases in the Americas and nearly 25 per cent of the deaths, she said.

‘We are not seeing transmission slowing down’ in Brazil, Etienne said.

PAHO recommends that Brazil and other regional countries strengthen social distancing and urged that reopening of the economy be done slowly and carefully.

Brazilian President Jair Bolsonaro has long opposed social distancing measures, and many of the country’s states are re-opening for business even though the outbreak remains severe.

Some villagers in the eastern Amazon are spurning Brazilian government advice to take the malaria drug hydroxychloroquine to keep the novel coronavirus at bay and are drinking tea of jambú, also known as the toothache plant.

Maria de Nazaré Sajes, 65, tested positive for the coronavirus and believes she fought off the symptoms by drinking the infusion of bitter leaves.

‘I made jambú tea and felt healthy again. People said: “Look at Maria, how she has recovered, she no fever or pains”,’ Maria said while she was boiling water on a gas stove in her wooden house.

Her village on the banks of a tributary of the Amazon was visited by public health workers to test inhabitants for the virus that is ravaging Brazil in the world’s second-worst outbreak after the United States.

US regulators withdrew approval this week for the emergency use of hydroxychloroquine to treat patients with COVID-19, the disease caused by the new coronavirus.

It is still being prescribed in Brazil as scientists around the world are working to develop a vaccine and effective treatments.