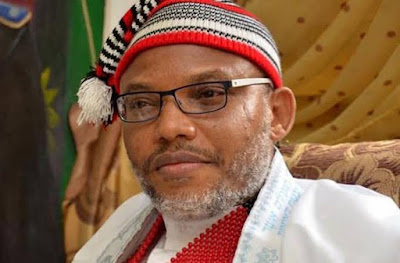 Having successfully celebrated May 30th Biafra day, the leader of the Indigenous People of Biafra, IPOB, Mazi Nnamdi Kanu, Sunday assured Biafrans and indeed the entire Igbo to be prepared  to welcome the sovereignty and independence of Biafra in no distance future.

Kanu has been struggling for the actualization of Biafra sovereignty and has been accused by the Nigerian government of committing treasonable felony. He was arrested in October 14, 2015.

During his speeches, Kanu has always called Nigerian government all manner of names, capable of demeaning the integrity of the country.


In view of the above, Kanu was arrested and charged to court, for felony. He later was bailed and instructed to:

Kanu must not hold rallies.

He must not grant interviews.

He must not be in a crowd of more than 10 people.

He must provide three sureties in the sum of N100 million each.

One of the sureties must be a senior highly placed person of Igbo extraction such as a senator.

The second surety must be a highly respected Jewish leader since Mr. Kanu said his religion is Judaism

The IPOB leader must deposit his Nigerian passport

He must also deposit his British passport with the court

He must provide the court with reports on the progress of his health and treatment on a monthly basis.

The order for him to deposit his Nigerian and British passports also mean he cannot travel out of the country (If this is considered, it is the thirteenth condition).

Having granted bail, Kanu left for his home town Afaraukwu, Abia state. On September 2017, Nigerian soldiers stormed his residence. Kanu said they came to his residence uninvited and injured occupants in an attempt to take his life.

In defense, Police said the Military personnel were only carrying out a procession to test a new armored carrier.

“There was no attack on the home of Nnamdi Kanu,” Abia police commissioner, Leye Oyebade, told Journalists.

“What happened was that the military was parading a new armoured carrier and passed through Nnamdi Kanu’s residence.

“It was while they were passing that some people threw stones and other things at them,” Mr. Oyebade explained.

But Mr. Kanu’s lawyer, Ifeanyi Ejiofor, disagreed with the police commissioner, saying there was a siege at Nnamdi Kanu’s residence.

In a statement Mr. Ejiofor accused the Buhari administration of attempting to take his client’s life.

“Just to alert the world that the Nigeria military personnel under the command of Chief of Army Staff is presently laying a siege on my client (Nnamdi Kanu) country home in umuahia.

“They had continued to shot sporadically into the air through which assaults, about five of his family members were brutally wounded and some unfortunately killed.

“There is no doubt that the present deployment of troops to the South East is to haunt for my client and possibly eliminate him,” the statement said.

It was at this point that Kanu was declared missing and later was found outside Nigeria. Ever since then, Kanu has been speaking and ministering via Biafra radio station on facebook.

His quest for Biafra independence has not stopped as he told Biafrans on Sunday to be ready to have their independence soon.

Below is his statement signed by the group’s media publicity secretary, Emma Powerful:

“We the great and indefatigable family of Indigenous People of Biafra (IPOB) worldwide ably led by the indomitable and prophet of our time Mazi Nnamdi Kanu congratulate every Biafrans for their resoluteness and determination towards the  peaceful observance and successful outcome of this noble event championed by IPOB in remembrance and commemoration of our fallen heroes and heroines who paid ultimate price and sacrificed much of their lives in Biafra war of annihilation by Nigeria government and her allies between 1967 and 1970.

“This year’s celebration of the epoch event went successfully well across Biafraland without any hindrance. All Biafrans around the globe celebrated this event in their respective countries of abode.

“Those who participated in this year’s Biafra Remembrance Day with candle processions all across Biafraland and beyond did well, and we pray the Almighty God (Chukwu Okike Abiama) to continue to protect them for what is absolutely coming in future.

“IPOB is totally ready and doing much to ensure that Biafra independence and sovereignty comes in our life time. Every inch of Biafraland observed and participated in the candle processions – the length and breadth of Biafraland, every inch of land, forest and sea where gallants men and women fought and fell to protect our children, relatives and generations unborn. In the midnight across our land, people of Biafra lit a beacon to shine lights of hope upon this generation of IPOB.

“This 30th of May 2020, our people remembered those who fought for us to live accordingly and we are on the know that their spirit and memories shall continue to abide with us until Biafra freedom is completely achieved.

“IPOB is working the clock round both local and internationally to ensure that those illegally arrested by Fulani terrorists in Nigeria army and police uniforms at Eleme during their candle procession are  released without further delay. Our unity is key and strengthens to achieve our freedom. Therefore, every Biafran must be prepared to welcome the sovereignty and independence of Biafra in no distance future.”