Asari Dokubo to Nnamdi Kanu: Swear if you have not been collecting money from governors 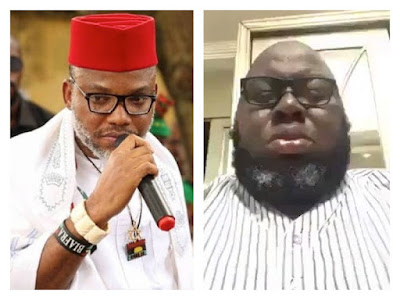 Mujahid Asari Dokubo, leader of the Niger Delta People’s Volunteer Force has taken a challenge thrown at him by Nnamdi Kanu of the Indigenous People of Biafra.

In a tit-for-tat, he has also thrown the challenge back to Kanu.

On Sunday 31 May, Nnamdi Kanu accused Dokubo of collecting N20million from him in 2016.

The money, he said, belongs to IPOB.

He then challenged him to swear on the Quran to deny the allegation.

“ASARI DOKUBO, if you claim that I didn’t give you money and I didn’t send people to discuss with you, make a video and swear with your Koran, SWEAR WITH YOUR RELIGION AND DIE.

“You are an idiot, you are a thief, over-bloated swamp pig”, Kanu said.

Dokubo has replied him in a video.

He also asked Kanu to swear on the Bible or the Torah, since Kanu says he is a Jew, if he has not been collecting money from South East governors.

Dokubo claimed Kanu’s payoff runs into hundreds of millions and that he collects money even beyond the region.

He further made a claim that will shock rabid IPOB members.

Dokubo alleged that Kanu has been betraying the IPOB members to the DSS, the secret police.