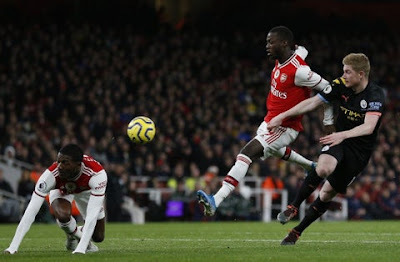 The Premier League makes its eagerly anticipated return on Wednesday after 100 days in lockdown, with Manchester City’s clash against Arsenal taking centre stage at the start of a frenetic dash to finish the season.

Coronavirus restrictions mean the drama will be played out with no fans in the stands but football-starved supporters in Britain and around the world will be able to feast on 92 televised games crammed into less than six weeks.

Liverpool could be just days away from winning their first English top-flight title for 30 years.

Should City lose to Arsenal at the Etihad, Jurgen Klopp’s men, who hold a 25-point lead at the top of the table, could be crowned champions as early as Sunday when they face local rivals Everton.


The battle for Champions League places next season and to avoid the drop are far more closely contested.

Both are in play when relegation-threatened Aston Villa get the ball rolling on Wednesday when they host European hopefuls Sheffield United.

All remaining matches will be preceded by a minute’s silence in memory of those who have died from COVID-19. Britain is the worst-hit country in Europe with more than 41,000 deaths.

Three of the four managers to lead their sides on Wednesday have been touched by the virus.

“What I live personally is the same as everyone lives. There is nothing different,” said Guardiola.

“For all the people who lost very important members of their families or real friends, it has been a difficult time.”

Guardiola’s former assistant Mikel Arteta returns to the Etihad for the first time as Arsenal manager three months after his positive test for coronavirus hastened the season shutdown.

“The night I had symptoms and how serious I was – I had to report it. I could have put people at risk and I wasn’t willing to do that,” said Arteta.