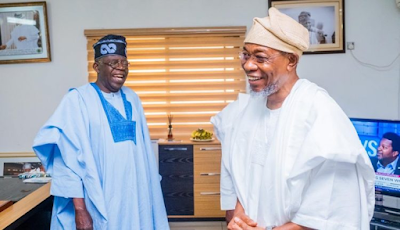 The Minister of Interior, Ogbeni Rauf Aregbesola has reacted to claims of nursing presidential ambition in 2023 and also dismissed claims that he is at war with his leader and mentor, Asiwaju Bola Ahmed Tinubu.

Aregbesola also denied any plans of nursing any presidential ambition.

He spoke in Abuja this afternoon against the background of the lies peddled by an online publication, The Cable. Ogbeni Aregbesola said his loyalty to Asiwaju is not only total but that his commitment to whatever the leader wants is unwavering.

The minister explained that ‘he knew where the story was coming from and the identity of those sponsoring it. ‘Rift with Asiwaju Tinubu? Nothing can be more impossible! Nothing can be farther from the truth. I remain committed to my mentor,’ Aregbesola said.

He added that “the group our detractors’ claim has been banned is the most committed to the realization of Asiwaju’s ambition.”


The minister noted “They even said I have presidential ambition. False!”

Aregbesola reiterated that the APC is one, adding that the party is like an oak tree that keeps growing.

He said his focus and goal is to execute his ministerial duties as directed by President Muhammadu Buhari.

The National Leader of the All Progressives Congress (APC), Asiwaju Bola Tinubu has reportedly taken some steps against the political moves by Rauf Aregbesola, Nigeria’s interior minister and former governor of Osun State.

Nigerianeye understands Tinubu on Tuesday afternoon, dissolved all political groups in the state not authorized by him.

The decision was announced at the meeting of the Governor’s Advisory Council (GAC) in Lagos.

This decision is coming as a result of the cold war between Tinubu and Rauf Aregbesola.

Aregbesola was accused of launching and operating political groups in the state without the knowledge and approval of Tinubu.

These political activities are understood to have pitched Aregbesola against Tinubu as both politicians are said to have an eye on the 2023 presidential contest.