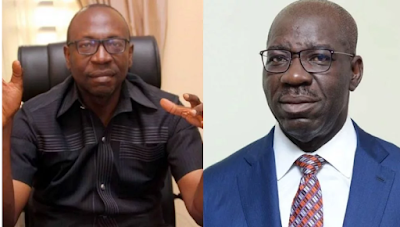 Pastor Osagie Ize-Iyamu, the All Progressives Congress, APC, governorship aspirant in Edo has reacted to the move by Governor Godwin Obaseki to enforce the laws and regulations placed to prevent the spread of COVID-19 in the State ahead of the APC primaries scheduled for today (Monday).

The Edo State Government had on Sunday reiterated its resolve to enforce the social distancing order and regulations put in place to prevent the spread of Coronavirus in the State.

The government charged political parties to restrict the conduct of their primary elections within the protocols and provisions of the state’s COVID-19 Quarantine Regulations and Gazette on political gatherings.

Obaseki’s government said it would spare no expense in upholding the law and protecting the lives of the people.


And the leading APC aspirant, Ize-Iyamu believes this announcement was made to frustrate the APC primaries in the State, insisting the rules were biased and hypocritical and done in bad-faith.

A statement on Sunday by Prince John Mayaki, Director of Communication and Media of Pastor Osagie Ize-Iyamu Campaign Organization, noted that Obaseki himself has been gathering hundreds of youths without any form of social distancing or protection.

“Without a hint of irony, especially a day after he assembled hundreds of youths at the PDP Secretariat without social distancing or any form of protection over his insignificant defection, the Governor laid claims to Edo State COVID-19 Quarantine Regulations and the state Government’s Gazette on political gatherings in a pandemic, and falsely accused the party of violating these guidelines,” the statement added.

“We wish to clarify to the public that unlike Governor Godwin Obaseki, the All Progressives Congress and its officials in Edo State are law-abiding.

“The adoption of the Direct mode of primary by the party was done to allow for an effective decentralization of the process, reduced inter-community and regional movements of people, and sufficient room for proper social distancing and process management in compliance with all health guidelines in place to curb the spreading of the coronavirus disease,” he said.

Ize-Iyamu, however, pointed out that having studied Obaseki ’s gazette, the APC in Edo State has designed a primary process that will see only a maximum of 18 persons, including officials, observers and voters, converge at a single point for the entire duration of the exercise across wards even though the Governor’s gazette permits 20 persons.

The statement said that necessary clearance has been sought and obtained from all relevant bodies including the electoral body, INEC, the Police, and health agencies.

“We, therefore, see no reason why Governor Godwin Obaseki would appoint himself alarmist-in-chief and use the instrument and resources of state to spread panic and falsehood.

“We urge the Governor to seek immediate attention for his obsession with the APC, focus on his new party, and desist from calculated moves intended to introduce chaos and disunity in our advancing party.

“His voluntary exit has opened the door to a blast of fresh air and decorum, and we are making great strides in the quest to restore long-lost sanity in the Government House,” he added.