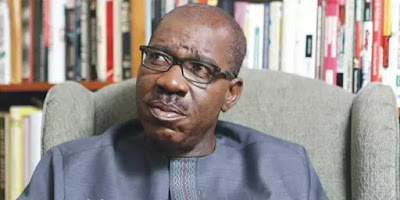 Edo State governor, Mr Godwin Obaseki, said on Saturday that he still enjoys the support and sympathy of governors elected on the platform of the ruling All Progressives Congress (APC).

Obaseki made the disclosure at the Abuja national secretariat of the PDP shortly after he was screened for the June 25 governorship primary election of the PDP.

Answering a question, the governor said he does not only enjoy the support and sympathy of APC governors, his support base cuts across board.

According to him, even dignitaries and other well-meaning Nigerians have come to identify with his aspiration, adding: “They are all united against injustice.”

Obaseki said: “I still thank God that I enjoy national support; not just support from my colleagues from the APC. I think the support is national.

“There are elder statesmen who are apolitical, there are traditional rulers. I have people from different spectra of the society who come around in solidarity with me and they support me because I think Nigerians are generally fair minded people.

“They are people who do not accept injustice. From what I have seen over the past several weeks and months, the support is across board. It is not just from APC governors alone.”

Meanwhile, one of the three PDP aspirants for the primary election, Kenneth Imansuangbon, has kicked against Obaseki’s participation in the exercise, insisting that he would not trade away his aspiration.

The two other aspirants, Gideon Ikhine and Omorege Ogbeide-Ihama, have not raised any objection to the inclusion of the governor in the exercise.

But Obaseki said he had already initiated discussions with the three aspirants, stressing that he did not join the PDP to divide the party but to unite it.

“I am not a dividing candidate. I am speaking with all the aspirants. My hope and purpose for the PDP is to have a united and very strong party.

“Party primary should not be divisive because we as a party are focused on the same objective, and because we are separate individuals, our approach may be different.

“So, party primary, in my view, should not be acrimonious and destructive. And there are common grounds, common interest and I am very hopeful that I will get it (ticket) even as there are quite a number of delegates for the exercise.”

On the contradiction inherent in his defection from the progressives’ camp of the APC to a conservative PDP, Obaseki said there has never been any ideological difference between the two parties.

“My experience is that having served four years as a governor, I don’t see that ideological divide. It doesn’t exist. I think the focus for me is development.

“Whether you are a conservative or a progressive, it is expected that the outcome should be development.

“And unfortunately, I got a bit confused in the APC. At some point, I was being accused of not sharing the money.

“When we were campaigning against PDP, we said that the problem there was that they were sharing the money. So for me, it cannot be about ideology.

“At this point in time, it is important that I will provide strong and correct leadership, provide a direction for the country and for our people, provide the basic amenities that they need – education, health care, good infrastructure.

“So as a progressive or as a conservative, my ideology is about the people: getting the people to enjoy the benefits of democracy.”

Governors elected on the platform of the Peoples Democratic Party (PDP) could not hide their excitement over the defection of the Edo State governor, Godwin Obaseki, from the ruling All Progressives Congress (APC) to the main opposition party.

The PDP governors are particularly excited that Obaseki’s entry into the party has increased the number of states controlled by the PDP from 15 to 16.

Similarly, the governors, particularly those from the South-South, are also happy that with Obaseki’s defection, the PDP is now in control of the entire six states in that geopolitical zone.

In a statement by the Director-General of the PDP Governors Forum, Cyril Maduabum, on Saturday, the governors described Obaseki’s entry into PDP as a homecoming to a democratic platform.

The Forum added that the PDP accommodates all Nigerians desirous of good governance, accountability and deepening of democratic tenets.

Welcoming Obaseki to the PDP, the governors said: “We welcome you to the PDP Governors’ Forum under the leadership of His Excellency, Rt. Hon Aminu Waziri Tambuwal and all other PDP governors in the Forum.

“Your entry into the PDP family is a homecoming to a democratic platform that accommodates all Nigerians desirous of good governance, accountability and deepening of democratic tenets.

“The PDP governors welcome you to use the PDP as a vehicle to enthrone rapid economic, social and infrastructural development of Edo State.

“As you subject yourself to the forthcoming primaries of the party, we wish you success and God’s blessings and guidance.

“The Forum extends the solidarity and support of your colleagues to you and all of your teeming followers into the party and assures you all of accommodation and level playing field.”