APC crisis: Buhari who asked me to be chairman, presided over my sack – Oshiomhole 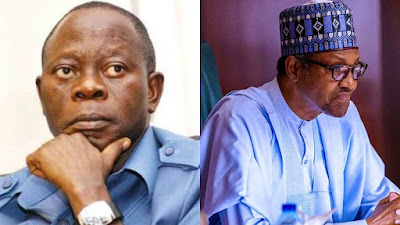 Adams Oshiomhole, immediate past National Chairman of the All Progressives Congress, APC, has revealed that President Muhammadu Buhari personally invited him to head the party two years ago.

Oshiomhole said Buhari asked him to head APC in a bid to reform the party and turn its fortune around.

He disclosed that the president had told him APC will lose the 2019 election, if the party was not reformed.

Speaking at a press conference in Abuja yesterday, the immediate past APC National Chairman insisted that he did his best while in office.

The former Edo State governor also disclosed that the president mobilised support for his emergence as APC National Chairman.

He said: “I ceased to be the Chairman of the All Progressives Congress APC.

“Mr. President graciously invited me to run for the office of the chairmanship of the party in 2018, precisely about two years ago. The president told me then that if we did not reform the All Progressives Congress, we can as well forget about 2019. Those were his exact words.

“But I know that reforms can be challenging and it will entail taking difficult decisions. I accepted this and I believe I did my best. I am happy that at the end of the day, the 2019 elections have come and gone and thanks to Nigerian people, our president had more votes in 2019 than we had in 2015 and we have more members in the Senate and in the House of Representatives.

“The bottom line is that the President who invited me to lead the party and who mobilised all the support for my emergence as chairman also presided over the meeting where the NWC has now been dissolved.”

The decision was a measure to resolve the leadership crisis in the party.