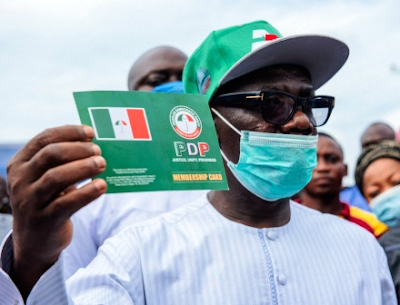 The All Progressives Congress (APC) has called on the Ondo State Deputy Governor, Mr Agboola Ajayi, who officially decamped to the People’s Democratic Party (PDP) on Sunday, to return to the party.

This was contained in a statement by Mr Alex Kalejaiye, the State Publicity Secretary of the party, on Monday in Akure.

The statement noted that APC was willing to reabsorb the Deputy Governor and his supporters whenever they opted to retrace their steps to the party.

The Publicity Secretary in the statement said that the APC received his defection with mixed feelings.


According to him, APC in the State views the development as worrisome and unfortunate that the journey commenced in one accord a few years back could go awry so soon.

However, the party urged the Deputy Governor to resign honourably if he won’t return to the APC.

“We wish Ajayi had not taken this decision, after series of efforts and attempts by royal fathers and party leaders, from within and outside the state, to forestall this migration.

“The State Working Committee of APC is taken aback by a reported statement credited to Ajayi that he would remain the Deputy Governor as long as his people have not asked him to quit. This statement is vexatious,” Kalajaiye said.

He added: “It is imperative to remind him that he ran on an APC ticket given to Gov. Oluwarotimi Akeredolu, and both were sponsored by the party.

“Now that he chooses to defect, the party advises Agboola to tow the path of wisdom, and resign honourably as the Deputy Governor of Ondo State.

“Ondo State APC wishes him and his followers a safe trip to the PDP”.