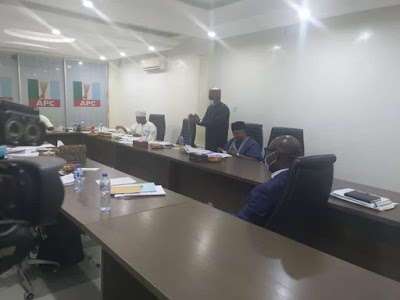 The Screening Appeal Committee of the All Progressives Congress-led by Dr. Abubakar Fari has upheld the disqualification of Governor Godwin Obaseki.

The appeal committee presented its report to the National Working Committee on Saturday.

The appeal committee corroborated the report of the screening committee by also citing discrepancies in the dates on Obaseki’s University of Ibadan certificate.

Presenting the appeal committee’s report, Fari said, “It is inconceivable that the same University will award two certificates with separate dates for the same graduate.

“We also find it difficult to vouch for the authenticity of his National Youth Service Corps certificate, there is no indication as to where he served.

“We find that he should be disqualified.”

Reacting to the report, Oshiomhole commended the chairman and members of the appeal committee for doing a “meticulous” job.

The APC National Chairman said: “It appears you were extremely meticulous in your findings, you have attention to details, and not just because of the findings.”

The screening committee of the party, headed by Prof Jonathan Ayuba, had on Friday said the governor was disqualified from participating in the party’s June 22 primary because of the discrepancies in his names and certificates and for taking the party to court in contravention of the party’s rules.