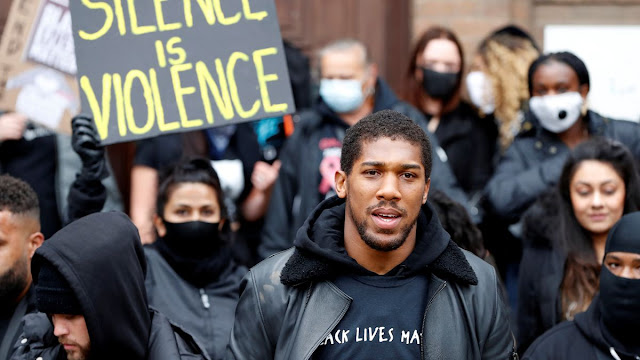 World heavyweight champion Anthony Joshua told a Black Lives Matter march on Saturday that protesters were the “vaccine” to the “virus” of racism.

“The virus I am referring to is called racism,” he said, comparing its effects to the damage done by COVID-19.

Meanwhile the British boxer asked: “How long are we going to allow racism to spread through our communities?”

Worldwide protests under the banner of Black Lives Matter took place Saturday in response to the death of George Floyd, a black American man who died in Minneapolis last month while being arrested by police officers.

“You are the vaccine, I am the vaccine,” the 30-year-old Joshua told a rally in his home town of Watford.

“Killing a person outright is unforgivable, but stripping them of their human rights, oppressing them, mocking them, insulting them, placing glass ceilings above them… is just a slower way of killing them and taking the life out of their soul.”

Joshua was on crutches at times on Saturday and was also seen wearing a knee brace, but a spokesperson insisted that was just a “precautionary measure”.

Joshua, the reigning WBA, IBF and WBO title-holder, felt a “slight twinge” in his left knee in a training session earlier this week.

But his camp insisted there was no cause for alarm.

“Anthony felt a slight twinge in his knee whilst training,” the spokesperson said.

“The brace is a precautionary measure on the advice of physios. It will be further checked by his doctors but there is no immediate concern.”

Joshua was due to defend his belts against Kubrat Pulev at Tottenham Hotspur Stadium on June 20 only for the bout to be postponed because of the coronavirus pandemic.